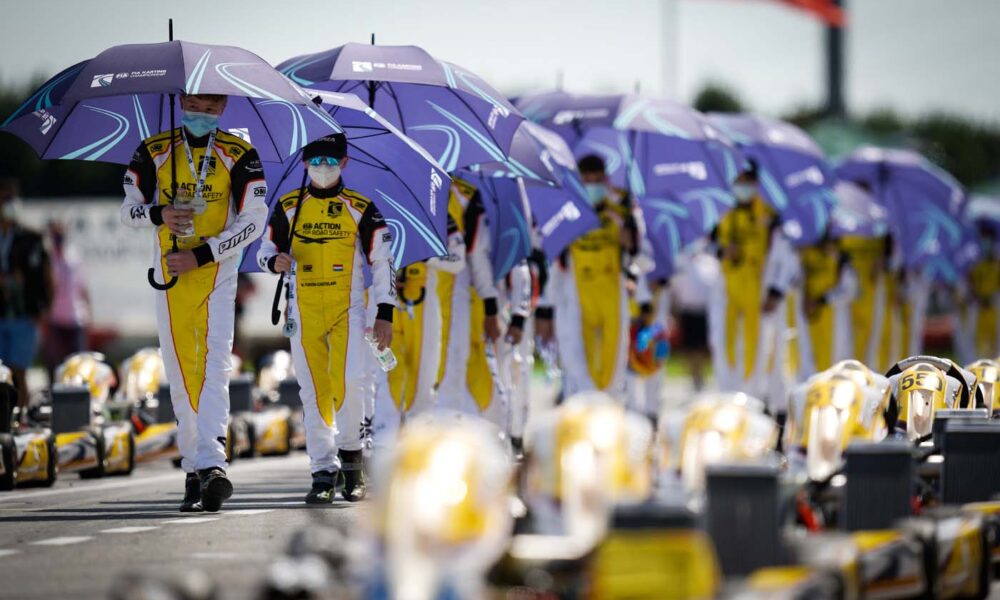 The first Competition of the FIA European Karting Championship – KZ & KZ2 and the FIA Karting Academy Trophy concluded on the circuit of Adria (ITA) after an excellent day of racing. In sunny and warm weather, the last Qualifying Heats preceded the three Finals on Sunday 16th August 2020.

The Swedish Driver Gustavsson dominated the KZ2 Final just as the young American Zilisch mastered the Academy Final. The outcome was more uncertain in KZ before the Italian Irlando secured victory after leading for the entire race.

Continuing the fight against Coronavirus with the strict application of the FIA sanitary protocol, the Adria Competition saw high temperatures, as well as a high standard of performance. The Adria Karting Raceway’s beautiful track, however, did not make it easy to overtake. The positions hardly changed over the laps, which does not take anything away from the achievement of the winners. Despite the heat, the Vega tyres did a good job on this track, which is known to be demanding on this point.

Provisional standings of the 2020 FIA Karting European Championship – KZ after the first Competition in Adria.

Gustavsson the master of KZ2.
Viktor Gustavsson (SWE – Birel ART/TM Racing/Vega) started the day in the best possible circumstances by winning his two Qualifying Heats, which ensured him pole position for the Final ahead of Simone Cunati (ITA – Birel ART/TM Racing/Vega), Giuseppe Palomba (ITA – Birel ART/TM Racing/Vega) and Paavo Tonteri (FIN – Tony Kart/Vortex/Vega). The Final was to confirm the same hierarchy. Gustavsson was the fastest and won in the colours of the Leclerc by Lennox Racing team with a substantial lead of more than six seconds and the fastest lap in the race. The gap between Cunati, Palomba and Tonteri narrowed as the race approached the finish, but the positions on the line remained unchanged. Cunati was therefore the highest placed Italian. Tom Leuillet (FRA – Praga/TM Racing/Vega) completed the top five ahead of Davide De Marco (ITA – KR/IAME/Vega). Like two other Drivers, Danilo Albanese (ITA – KR/IAME/Vega) was late to the grid and was not allowed to start.

Provisional standings of the 2020 FIA Karting European Championship – KZ2 after the first Competition in Adria.

Zilisch flies ahead of the Academy Final.
Connor Zilisch (USA) started to make the difference in his last Qualifying Heat on Sunday morning. Zilisch’s victory took him to the top of the standings and he shared the front row of the Final with Maxime Furon Castelain (LUX). Although the latter dropped back to 5th position shortly after the start, Zilisch performed well up to the finish line, which he crossed as a strong winner with a lead of more than four seconds and the fastest lap. The fight was fierce behind him. Furon Castelain was able to move up to 2nd place ahead of Jonathan Weywadt (DNK), Macéo Capietto (FRA) in 4th and Rafael Modonese (PER) in 5th. 11th at the chequered flag, the Italian Matteo De Palo was 20th after penalties were applied.

Provisional ranking of the 2020 FIA Karting Academy Trophy after the first Competition in Adria.

The three categories will meet in three weeks time for the conclusion of the FIA European Karting Championship – KZ & KZ2 and the second of the three FIA Karting Academy Trophy Competitions.