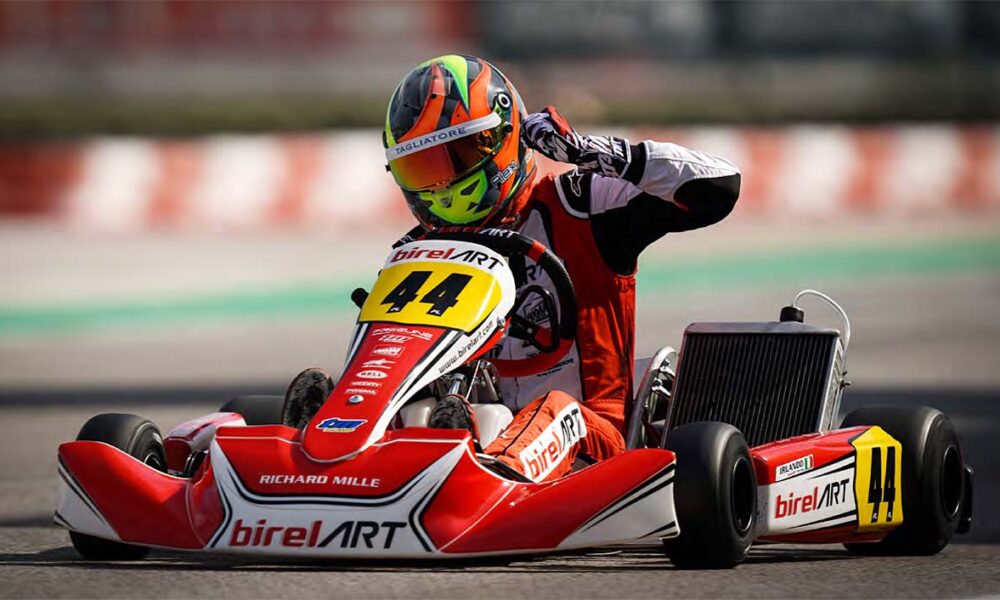 The KZ World Champions of 2019, the Birel ART Racing Team has just started its FIA European Karting Championship campaign with a masterful victory by Alessandro Irlando.

This success was completed by the third step of the podium for Riccardo Longhi and 4th place for Marijn Kremers at the wheel of his Ricciardo Kart. The Birel ART chassis proved to be just as effective in KZ2. Viktor Gustafsson easily won the Final in the colours of Charles Leclerc with the Lennox Racing team, while Giuseppe Palomba was 3rd!

Birel ART Racing Team left the Adria Karting Raceway satisfied with their work as the Italian brand was victorious in both categories. “Before arriving in Adria, we were confident about the performance of our equipment, but each race is a new challenge. I am happy to see that our drivers and our increasingly professional technical staff have met this challenge masterfully,” said team manager Luca Filini. “The drivers we have entered in this meeting in KZ and KZ2 have always been at the front of the field. I would like to thank our partners and in particular our engine manufacturer TM Racing”.

KZ: Irlando the early leader of the European Championship.
From Friday, Alessandro Irlando marked his territory by taking pole position. The Qualifying Heats saw the Italian maintain his front row position for the Final, with Marijn Kremers, Matteo Vigano and Riccardo Longhi just behind him in 6th position. On Sunday afternoon, Irlando made a perfect start to the Final and went on to win unchallenged. “The equipment worked perfectly throughout the meeting, the Birel ART team did a fantastic job and the performance of my TM Racing engines did the rest. I have a special thought for Claudio Flenghi, the founder of the TM brand, who recently passed away,” said Alex. Still very fast, as evidenced by his fastest lap, Riccardo Longhi joined him on the podium in 3rd position. Marijn Kremers was celebrating his first race with a Ricciardo Kart chassis with 4th place… A great group shot for the Italian factory in this very high level category!

KZ2: Triple for Birel ART chassis!
In addition to the performances from Birel ART Racing Srl, several other teams took advantage of the chassis from the Lissone factory. The Swedish driver Viktor Gustavsson won all his races with the colours of the Leclerc by Lennox Racing team: four heats and the Final with the fastest lap in the race! Behind him, Simone Cunati (Modena Kart ASD) and Giuseppe Palomba completed the triumph of the Birel ART chassis, a real benchmark in the gearbox categories.

Leonardo Marseglia, who teamed up with Palomba in the official team, also put himself in the spotlight throughout the KZ2 meeting, managing to take the chequered flag in 7th position.