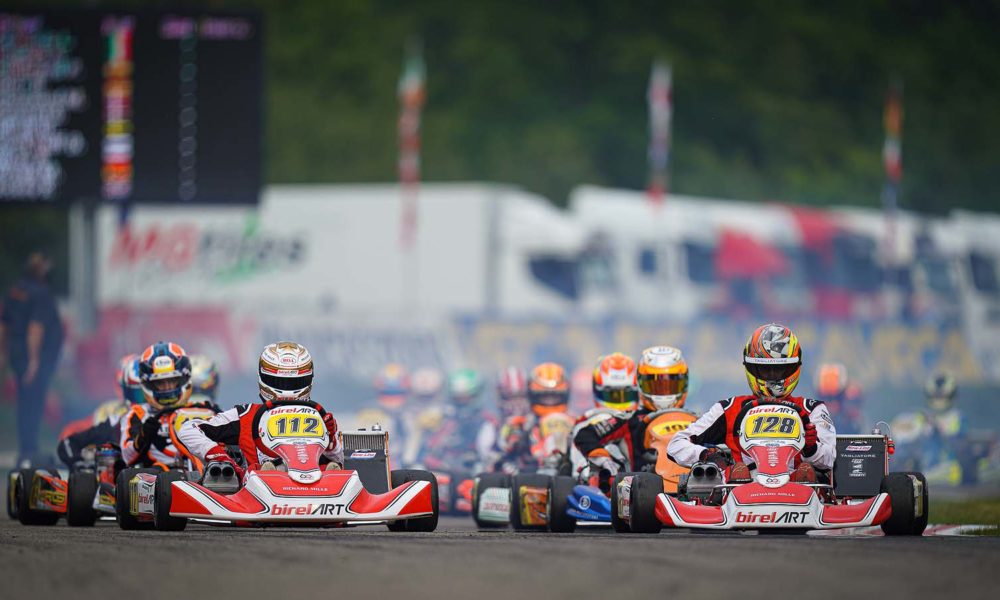 During a particularly tricky competition, Birel ART Racing was able to place two of its drivers at the front of the OK European Championship. Pole position and 3rd place in Qualifying Practice for Luigi Coluccio and Alessandro Irlando, followed by two top-three finishes in the heats, confirmed the level of performance of the Birel ART chassis and their TM Racing engines at the highest level.

“All the participants in the European Championship had a very complicated weekend at Genk,” explained Luca Filini, Team Manager of Birel ART Racing. “The speed with which the weather constantly changed was a real headache for technicians and drivers. We are very pleased to have had the opportunity to highlight ourselves, while regretting that the final result did not actually match our performance.”

The young OK-Junior drivers from Birel ART Racing have achieved well after a very complicated Qualifying. Most of them made good gains during the heats, but various setbacks slowed their progress. Rafael Camara was credited with a total rise of 34 positions since Qualifying, finishing 15th in the Final, while Lorenzo Ressico d’Aloisio gained another 12 places in the Final. Elliott Vayron, who had some great runs, was finally forced to retire, while Cristian Bertuca suffered two losses in the battle of the pack, which deprived him of qualification for the Final.

Luigi Coluccio negotiated the perilous exercise of Timed Practice in OK by achieving pole position in the rain. Alessandro Irlando took 3rd place by setting the fastest time of his session on slicks on a slippery track. While Nikita Artmonov saved 26th place, Thomas Nepveu and Sutumno Thanapongpan were heavily penalised. Irlando and Coluccio performed very well in the first three heats before losing ground to drivers who put their new tyres on early in the last two. Irlando was in the top five early in the Final and finished in 9th position after a fierce fight, while Coluccio was forced to give up a few places because of an electrical problem that limited the maximum speed of his engine and prevented him from being as fast as in the heats. Irlando kept his 8th place in the provisional ranking of the Championship and Coluccio regained almost 10 places compared to the meeting at Angerville.

The two women selected by the Richard Mille Young Talent Academy continued their training. Maya Weug confirmed her speed fighting with the best OK drivers who often gave her a hard time. Julia Ayoub was once again discovering a new track in difficult track conditions for her.