WSK: The four favorites after the qualifying races 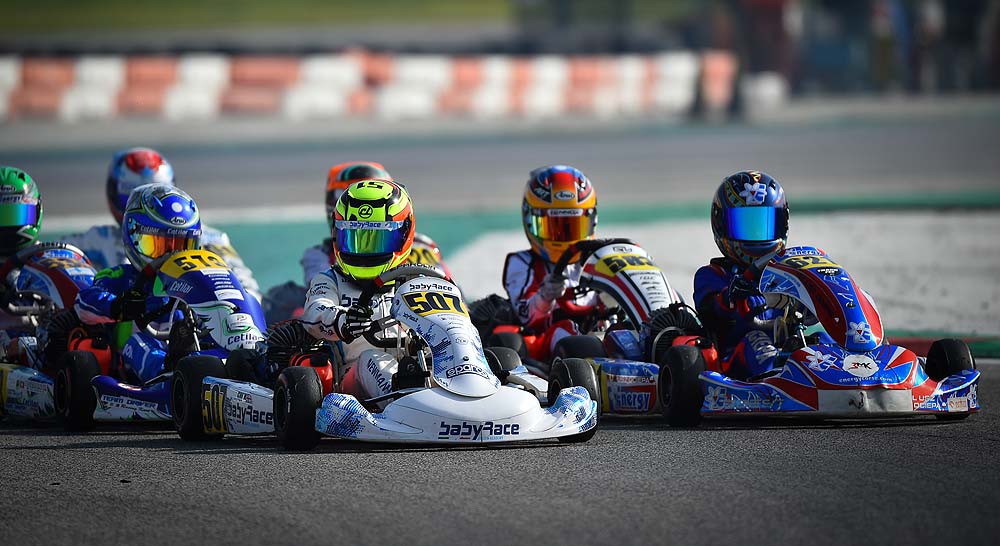 WSK: The four favorites after the qualifying races
P S

The heats on Saturday named the provisional classification leaders at the Adria Karting Raceway: Puhakka in KZ2, Lindblad in OK, Slater in OKJ , Costoya in MINI. The final stages available through the Live Streaming from wsk.it will be on Sunday, February 28th.

The second day of the WSK Super Master Series saw more than 340 drivers on track on Saturday, February 27th to hunt for a pass to the final stages of this important international event. So far 47 heats have been run in KZ2, OK, OKJ and MINI and three are left to go to on Sunday morning to complete the 50 scheduled heats. The final stages will be available through the live streaming feed from www.wsk.it. It will start at 11:00 with the double Prefinals of each category and all the Finals that will start at 14:20.

Tight and high-level races have been run so far and a lot of drivers have what it takes to aim to the victory. The provisional classification of KZ2 is currently led by the Finn Simo Puhakka (Tony Kart Racing Team/Tony Kart-Vortex), that of OK by the Brit Arvid Lindblad (KR Motorsport/KR-Iame), OK-Junior’s by the Brit Freddie Slater (Ricky Flynn/Kosmic-Vortex) and MINI’s by the Spaniard Christian Costoya (Parolin Motorsport/Parolin-TM Racing).

Puhakka on top of KZ2.
The provisional classification of KZ2 is led by the Finn Simo Puhakka (Tony Kart Racing Team/Tony Kart-Vortex), who claimed two wins, but the Swede Viktor Gustavsson (Leclerc by Lennox/BireART/TM Racing) also won two heats, while the other Finn Juho Valtanen (KR Motorsport/KR-TM Racing) and the French Adrien Renaudin (Sodikart/Sodi-TM Racing) secured one win each. Also to the fore were the Italians Danilo Albanese (KR Motorsport/KR-Iame) and Francesco Celenta (Parolin Motorsport/Parolin-TM Racing) that claimed one win.

Lindblad on top of OK.
The closing heat of OK saw the Brit Joseph Turney (Tony Kart Racing Team/Tony Kart-Vortex) coming to the fore, but his fellow-countryman Arvid Lindblad (KR Motorsport/KR-Iame) confirmed his lead taking two wins at the debut in OK after winning the WSK Super Master in OK-Junior last year. Among the quickest with one win each were the Brazilian Rafael Camara (KR Motorsport/KR-Iame), the Bulgarian Nikola Tsolov (DPK/KR-Iame) and the Italian Edoardo Ludovico Villa (TBKart/TBKart-TM Racing).

Full-haul for Slater in OKJ.
In OKJ the Brit Freddie Slater (Ricky Flynn/Kosmic-Vortex) confirmed the speed showed early into the weekend when he was the fastest in practice. He kept his momentum winning all the 5 heats. The recent winner of the WSK Champions Cup, Rashid Al Dhaheri (Parolin Motorsport/Parolin-TM Racing) is chasing him with four wins though. The German Maxim Rehm (Ricky Flynn/Kosmic-Vortex) also had a strong day and won two heats.

What a fight in MINI!
MINI has been spectacular as always with the young pupils of international karting challenging each other. The heats will end on Sunday morning and so far a lot of protagonists have been shining. The most successful in the 17 heats run so far were the Spanish Christian Costoya (Parolin Motorsport/Parolin-TM Racing), the Pole Jan Przrowsky (AV Racing/Parolin-TM Racing) and the Dutch René Lammers (Baby Race/Parolin-Iame) that claimed three wins each, while the Russian Gerasim Skulanov (CRG Racing Team/CRG-TM Racing) follows with two wins. It is impossible to predict the final outcome.