WSK: After official training in Adria 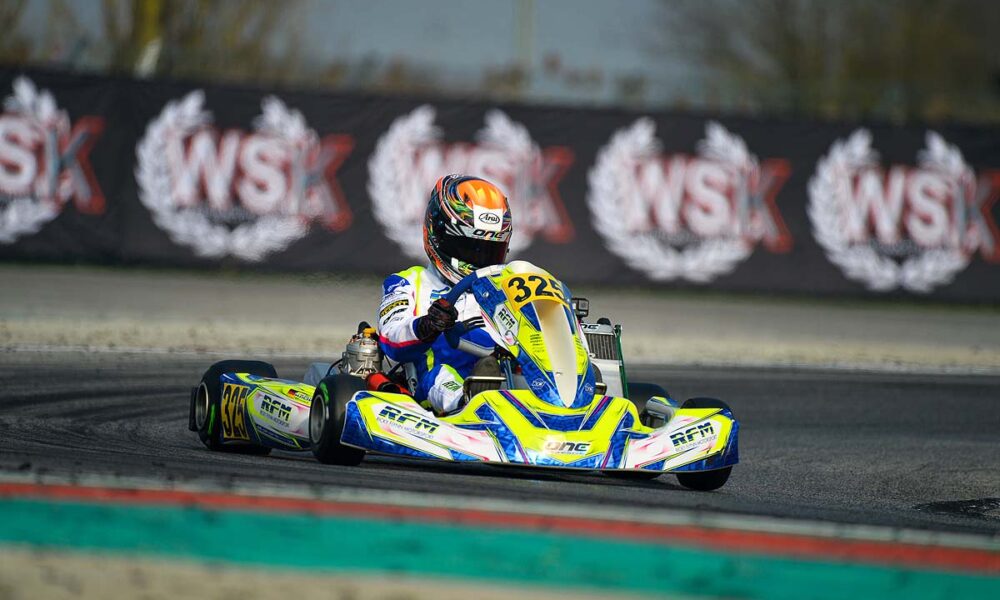 Qualifying practice and heats defined the early protagonists of the WSK Champions Cup at the Adria Karting Raceway. A total of 52 heats are scheduled ahead of the final stages on Sunday February 21.

The only round of the WSK Champions Cup is underway at the Adria Karting Raceway as the opener of the 2021 season that sees more than 330 drivers on track from 51 different countries.

Four categories, namely, MINI, OKJ, OK and KZ2 will be on track and will have to run 52 heats ahead of the final stages that will take place on Sunday. The two Prefinals for each category will begin on Sunday at 11:20 and the four finals will begin at 14:25 and will enjoy the live streaming coverage available from www.wsk.it.

KZ2, Renaudin and Celenta to the fore.
In the first of the two heats of KZ2 on Friday the victory went to Danilo Albanese (KR Motorsport/KR-Iame), but then he slipped down to the tenth place of the provisional classification due to a 5s penalty for jumping one start. The victory went therefore to the French driver Adrien Renaudin (Sodikart/Sodikart-TM Racing), who started from the pole position and led the two Dutch drivers Stan Pex (KR Motorsport/KR-TM Racing) and Martijn Van Leeuwen (Energy Corse/Energy-TM Racing) at the flag. The Italian Francesco Celenta (Parolin Motorsport/Parolin-TM Racing) came to the fore in the second heat when he won from the Finn Juho Valtanen (KR Motorsport/KR-TM Racing) to Viktor Gustavsson (Leclerc by Lennox/BirelArt-TM Racing).

Several protagonists in OK.
The first heat of OK was won by the Finn Nikolas Pirttilahti (Forza Racing/Exprit/TM Racing), while the second one by the Brazilian Rafael Camara (KR Motorsport/KR-Iame). A good result at the debut in the higher category was obtained by the Brit Arvid Lindblad (KR Motorsport/KR-Iame), who won the third heat and posted the pole position time in qualifying. The Finn Tuukka Taponen (Tony Kart Racing Team/Tony Kart-Vortex) confirmed his speed winning the fourth heat of the day.

MINI produced a lot of spectacle as Olivieri and Tarnvanichkul take two wins.
MINI put on yet another exciting show. Two wins went to the poleman Emanuele Olivieri (Formula K Serafini/IPK-TM Racing) and to the Thai Enzo Tarnvanichkul (Team Driver/KA-Iame), while other protagonists were the Dutch René Lammers (Baby Race/Parolin-Iame), the Swiss Kilian Josseron (Team Driver/KR-Iame), the Asian Tiziano Monza (Sauber/KR-Iame), the Pole Jan Przyrowsky (AV Racing/Parolin-TM Racing) and the Italian Jacopo Martinese (CMT/Parolin-TM Racing), who won a spectacular heat at the end of the day.