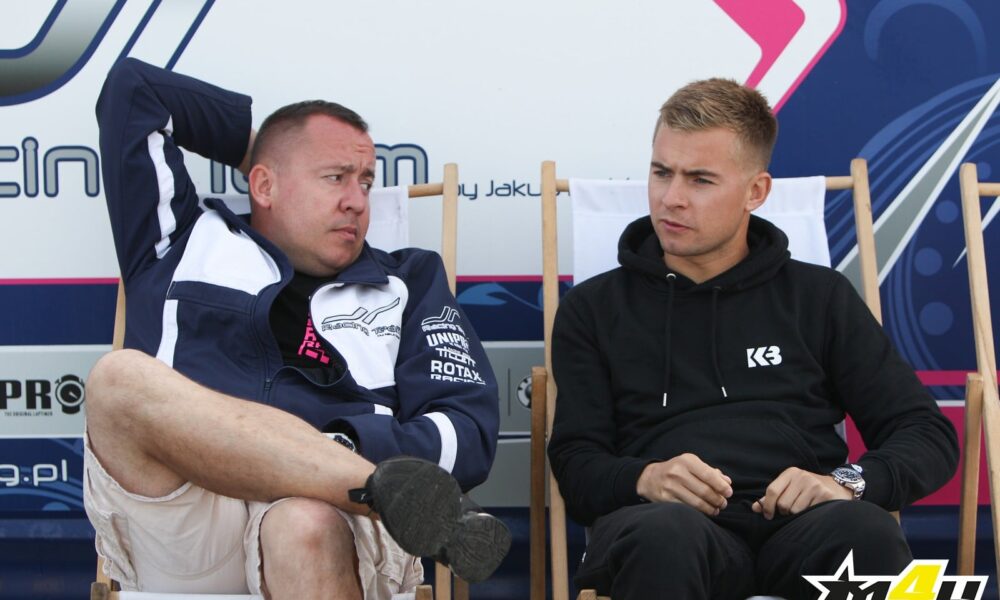 Kuba Rość: It will be the final of very big surprises.
P S

The Rok Cup Superfinal has been moved from the South Garda Karting, world karting temple in Lonato to a regional and intimate circuit Franciacorta. Many Poles take part in the largest Rokkers event in the world. One of them is Kuba Rość with his JR Racign Team, who puts two drivers in the final. This is Karol Czepiel and the Chinese driver Yicheng Qu.

What is your impressions after watching the Franciacorta circuit?
The track thread is cool, but there is zero gum. It will be a real shock to the people who have been driving and are used to the track in Lonato. South Garda is “glued” to the maximum, and there will probably be a slide. The track at this point looks like a construction site. Freshly built toilets, not plastered, maybe they can paint them for two days, we’ll see. Generally, you can see that the track is being built anew, at least the facilities. I don’t know how and from where people will watch the competition, because there really is no place here. The mechanics stand is at the end of the start straight, where you can’t see 30% of the track. The machinery park covers one third of the Lonato park area, I don’t know how everyone will fit in here. The paddock is very small. If five large trucks roll in, it would take half the paddock. I don’t know what it will look like.

It is a regional, intimate track …
There is no car park at all! I don’t know where all those who arrive there by cars will stop. There are some roundabouts, streets that turn directly onto the track, so people will be queuing, normally in the streets. I am afraid there will be great confusion. We can expect this on Monday morning.

Do you think how many people the organizers can expect at the event?
As we registered for the Rok Superfinal, each competitor could add two mechanics and two accompanying persons. So there were four people assigned to one driver. It’s easy to count: 300 drivers and 4 people for each of them, we get over 1000 people. There will be so many people on the Franciacorta Karting Track. Good luck, but we’ll see. There was a lot of space in Lonato, especially now, in Covid terms. Here? Each will probably stand on the other’s head.

What does the back of the track look like?
There is a bar in a small tent that can cater for a party, maybe 50 people. With 1,000 people or more, I don’t see the possibility. There is no restaurant. If the competition is here in two months, OK. I am able to believe that everything will be prepared. At this point? I don’t know. After all, there are still fresh drywall on the walls, not plastered…

I suspect the work was sped up earlier this week when it was known that Lonato would be closed for the Rok final…
I think so too. It looks like fresh construction work. We spoke to the owner of the bar. He is terrified. He told us they got a call three days ago to organize a competition here. And he asks: But how? I have one fridge, a piece of stove to heat up some pizza, one beer dispenser and how am I supposed to serve a thousand people a day here? .. but they were told him about the competition here and they were to get it…

How far are you from the hotel?
We live exactly 48 minutes from the track. Of course, if there are no traffic jams on the highway, or other slowdowns, accidents.

What is the logistics plan then?
It is expected to rain in Lonato on Sunday, so we set up on Saturday. Anyway, it will probably do most of teams it in the paddock, because nobody wants to fold in the rain or wet. The Franciacorta track opens on Monday at 7.30 AM, so we will leave around 4 AM to take the queue at the gates of the track, because there will be a line for sure. And for sure there will be a mega row about who should stand and how, because from Monday everyone will want to train there. And the time to put up a tent next to the truck also takes time.

Do you think that this can be a good competition, such a “cleansing”, because many teams and drivers have and have prepared engines or even chassis for the track in Lonato. Not set, but mechanically adjusted, already based on production. It will be interesting, don’t you think?
Of course. The factories have access to Lonato all year round and are free to test and prepare the chassis. And suddenly there is a big surprise and the action looks like the Rotax Grand Finals. A different track every year. And here too, it suddenly turns out that we are driving on a completely different track, which nobody knows. On the Rotax Grand Finals it looks like this: in the first training session it starts with 59 seconds or 1 minute 2 seconds, and ends with 8 seconds minus to your time. Conditions change, the track changes. In Lonato, you come on the first day of training and you have a rubberized track that works all the time. But I am prepared and used to it, thanks to the Rotax Grand Finals, where from session to session, both the competitor and the team, the mechanics gradually prepare for the competition. The competitor accelerates, the track accelerates, because it is more and more rubberized and everyone “follows” session by session conditions. And here at Lonato, you have the same conditions all the time when it comes to track specification.

So, are you already prepared and seasoned on a completely unknown track?
I am definitely calmer because I know where to start and how to work afterwards. And everyone who has been sitting in Lonato for years knows what is going and how it goes. And suddenly they come to a different track and know nothing. The tires will deteriorate to the maximum. Three or four sessions and there will be no tires. The asphalt on the track is not rubberized, a bit porous, so the tires will disappear instantly.

Is it possible to risk a statement that this final will be won by random drivers or “not favorites”?
For sure. It will be the final of very big surprises.

Which is your Rok Superfinal?
Fifth or sixth as a mechanic, but as the JR Racing team, it’s our first time here.

What are you guys up to? Of course, it is difficult to talk about any plan in this situation.
We are not focused on anything. At the beginning there will be a plan to somehow align the gear ratio in the karts, which will be extremely difficult as the track will change all the time. In Rotax we have it easier because the gear ratio is imposed from above, plus or minus three teeth. Here it will be more difficult. I looked at the specs of the track, there are two long straights but there are also a lot of tight turns. You will have to find a golden mean in all of this. That’s one, and two are chassis settings and Lonato set-ups at a billion percent will not work here. There is a completely different asphalt here, completely different grip, so you can forget about what you tested on the track in Lonato. On Monday morning, we enter a completely unknown territory.

Is there any go-kart rental at Franciacorta?
Yes, it is. They had two karts, including one KZ, which broke down so there was one left 🙂 Of course, seriously speaking, unfortunately, they have nothing there …