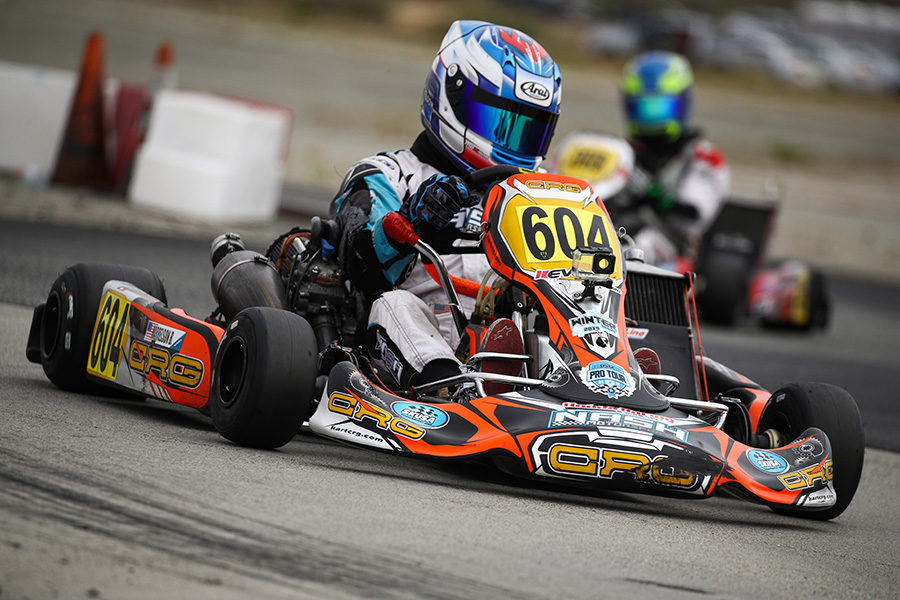 The California ProKart Challenge began the second half of the 2019 championship season, hosting Round Four at the Marina Airport Kart Track on July 13-14. The Superkarts! USA regional program took to the home of the Monterey Bay Karters for the two-day event, with practice and qualifying held Saturday, Prefinal and Final held on Sunday. The weather was unseasonably colder, with strong winds dropping the temperature, making the July weekend feel like a winter trip along the Pacific Ocean. The racing was not affected, however, as a number of drivers added to their win totals to help their title chase hopes.

The star of the weekend was Josh Pierson, as he swept both the Nash Motorsportz X30 Junior division and Allen Berg Racing Schools KA100 Junior class. Pierson swept the X30 category, trailed all day by championship leader Branyon Tiner. Early challenges by Tiner in both the Prefinal and Final kept Pierson from wire-to-wire wins. Pierson led 24 of the 25 laps in the Final to claim his second victory of the season. Tiner was second, grabbing the fast lap of the race bonus while Dustin Salaverria won the fight for third ahead of Blake Nash and Frankie Mossman. The KA category – largest of the weekend with 18 drivers – was a similar result with Pierson and Tiner 1-2 all day. Pierson was able to lead throughout the day after recording fast lap in qualifying, staying out front for the Prefinal, and then earning maximum points with quick lap in the main event en route to a four-second advantage at the checkered flag. Tiner settled for second, with Maximilian Opalski earning the third spot. He won in a battle against Cain Fredricks and Boden Barnwell, both making their first starts of 2019 with the California PKC. 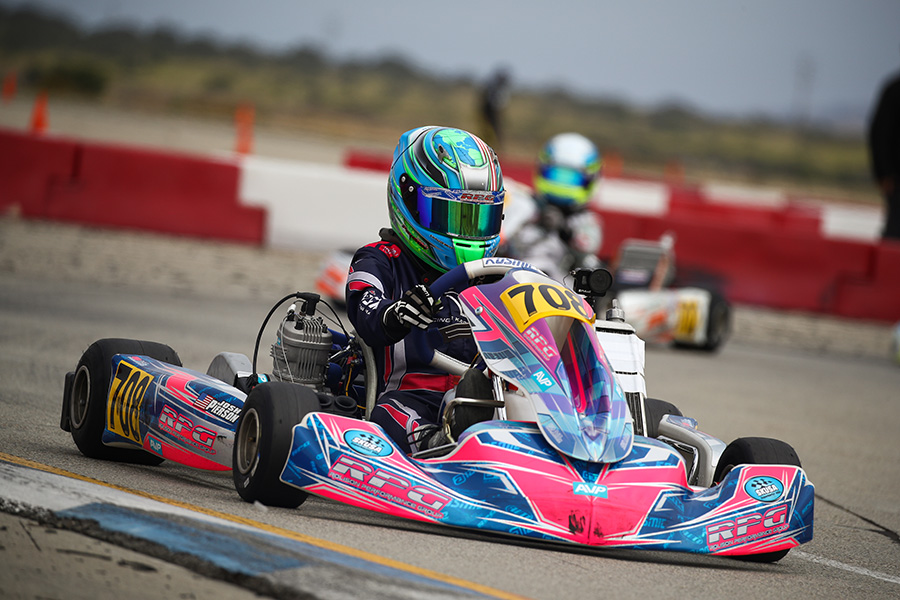 Defending Rolison Performance Group X30 Senior champion Joseph Daniele had his best result of 2019, coming away with his first victory of the season. Christian Brooks set the bar in qualifying with a 38.867-lap before leading all 15 laps of the Prefinal – with Trey Brown on his bumper. Daniele qualified seventh and worked his way up to the third spot at the end of the Prefinal. Brooks led the opening six laps of the Final until Daniele took over the point. From there, Daniele showed the way to the checkered flag for the victory, with Brooks holding second. Round Two winner Billy Musgrave set fast lap in the main event, placing third as Jacob Gulick and Brown completed the top-five.

Billy Musgrave was able to keep his win streak alive in the Croc Promotion USA/Mad Old Nut Pro Shifter category, now at 10 after a sweep in Marina. Musgrave set a new track record with the IAME SSE 175cc powerplant, posting a 37.449-lap in qualifying. That set the stage for him to go wire-to-wire in both the Prefinal and Final. Jake French was a solid second with Cody Hodgson in third. Emon Fazlollahi scored his second win of the season in the Musgrave Racing Company Pro Shifter 2 division. Connor Robles set fast time in qualifying until Fazlollahi grabbed the holeshot to begin the Prefinal. From there, Emon went wire-to-wire for the Prefinal win and the Final victory. Micah Hendricks drove to second with Anthony Freese ending up in third. John Crow made it three for 2019 in the Alpinestars G1 class, sweeping the weekend ahead of Carl Lewis. 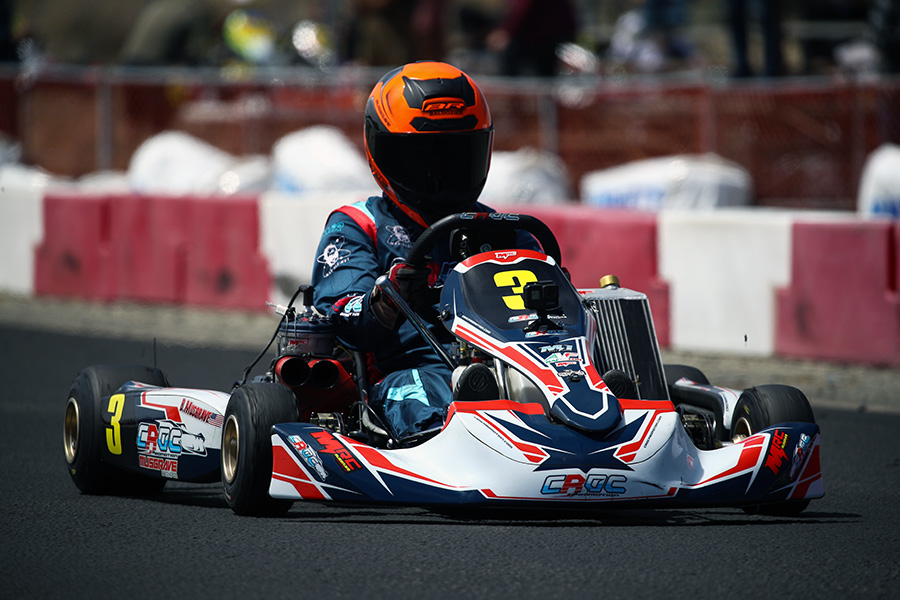 The Doran Motorsports Group KA100 Senior division welcomed a third different winner on the year. Luis Perez set the fast time in qualifying, edging out Round One victor Nick Persing and two-time winner Oliver Calvo by nine hundredths of a second. Both Calvo and Persing worked past Perez at the start of the Prefinal, as the top qualifier fell to fourth at the end of the 15 laps. The top two fought hard throughout the first half of the Final until contact between the two on lap 14 dropped Persing down the order. Calvo went on to reach the checkered flag first, but was penalized five seconds for avoidable contact. The penalty promoted Perez to the top step of the podium and moved Christopher Martin to second. Calvo was classified third, with Persing climbing back to fourth with fast laps of the race.

The number of winners is the same in the International Kart Federation-sponsored KA100 Master division as well, welcoming Kelly Heil to the list of victors for 2019. CalSpeed double-winner Mike Smith set fast time in qualifying and led the early part of the Prefinal. Heil took the lead from Smith and won the race. Smith came back to grab the lead to begin the Final until Heil reclaimed the top spot on lap 15, pulling away to a three-second advantage for his first victory of the season. Steven Jasinski joined Heil and Smith on the podium in third, beating out Round One winner Ricardo Arruda for the spot. 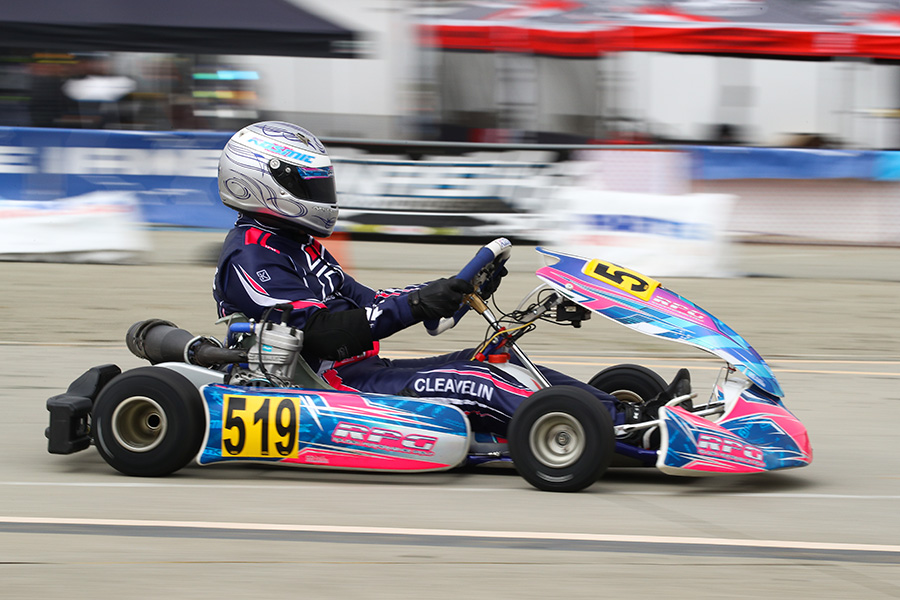 Billy Cleavelin marked his 2019 debut in the Empire Karts X30 Master class with a sweep in Marina. Cleavelin held the top spot throughout the round, going wire-to-wire on the weekend for his first victory of the season. Steve Martin ran second with Chris Carel in third – while point leader Brett Harrelson was fourth, stealing fast lap of the race. The number of winners in the AiM Sports X30 Super Master category is now three as well, with Jon Persing taking home the win on the weekend. Bob Bigiogni made his 2019 California PKC debut with fast time in qualifying and the win in the Prefinal. Bigiogni drifted back in the Final, allowing Persing to claim the top spot and his first victory of the season. Jeff Rice finished second with Bigiogni ending up in third. 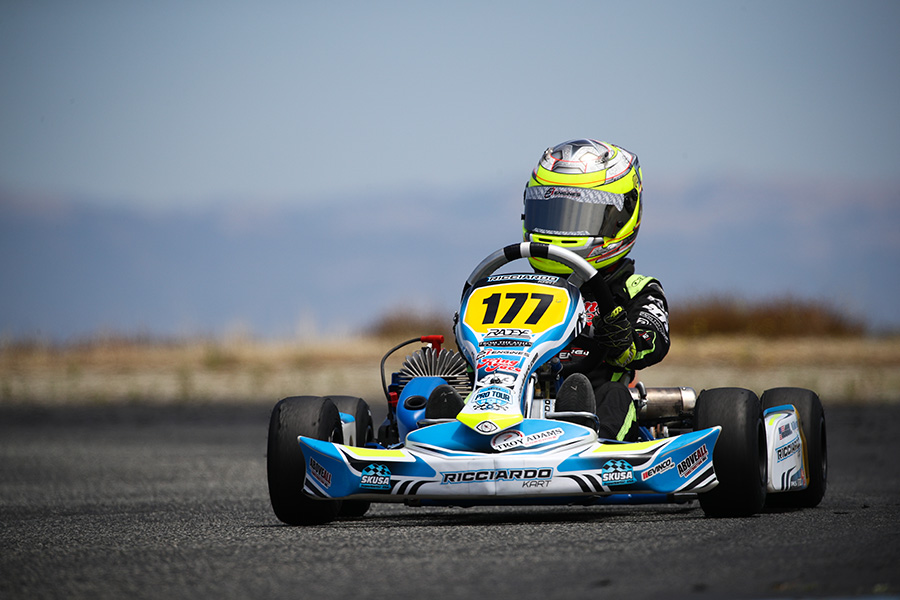 Jesus Vasquez Jr. has an incredible run going in the Ace High Designs Mini Swift class, earning a fourth straight win on the year. Aside from the Prefinal in Round One, Vasquez has ended each on-track session in the P1 position. Marina was no different, with Vasquez going wire-to-wire on the weekend for a complete sweep. It was not a perfect score, however, as runner-up Jack Schrady kept the pressure on and recorded fast lap in the main event. Ryan Persing joined them on the podium in third. Graham Trammell earned his second victory of the year in the IAME USA West Micro Swift class. The defending class champion earned maximum points on the weekend, sweeping the event. Logan Chambers was second with Tristan Murphy completing the podium.

The California ProKart Challenge will resume the 2019 season after taking the month of August off for the Superkarts! USA SummerNationals in Indiana. Round Five of the California PKC championship chase is set for September 7-8 at the Santa Maria Kart Track. 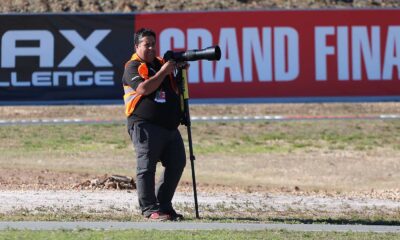 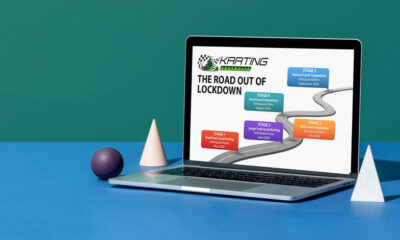