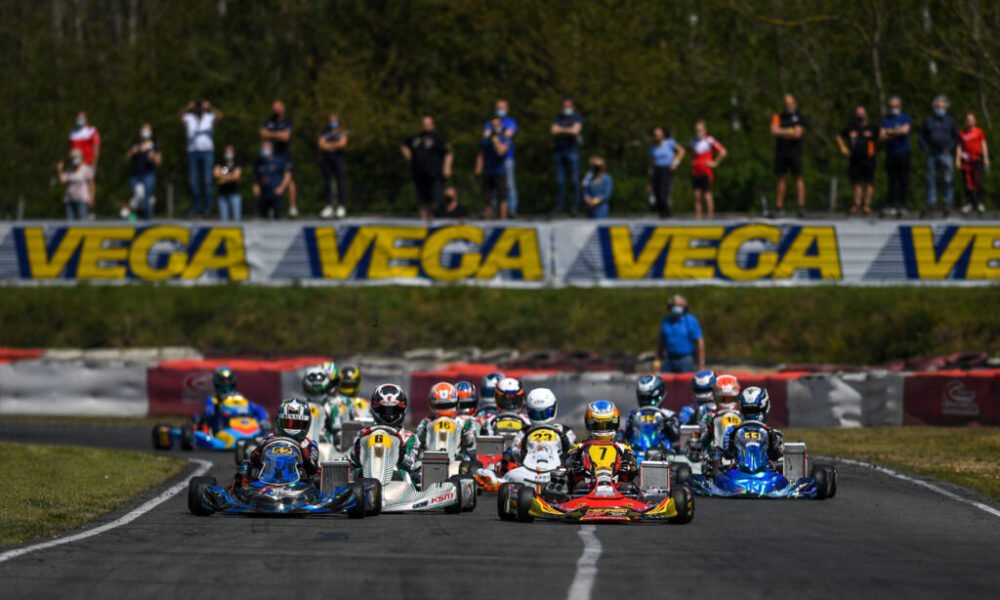 The German Karting Championship had a successful kick-off, last weekend on the Erftlandring in Kerpen where 114 drivers from 16 nations drove thrilling races in changing weather.

It had been almost half a year since the finale of the German Karting Championship at Oschersleben, but now the engines roared again in the highest kart racing league in all of Germany. The kick-off weekend took place on the 1.107-meter long Erftlangring in Kerpen in compliance with an extensive hygiene-concept. The race track in North Rhine-Westphalia has a great tradition across the borders of Germany and has been the birthplace of numerous big motorsports careers.

Despite the restrictions due to the worldwide Covis-19 pandemic, the four-grade series DKM, DJKM, DSKM, and DSKC were brilliantly manned. Reigning and former Champions dueled with success-hungry youngsters. The first victories of the year went to Niels Tröger, Juliano Holzem (both DKM), Akshay Bohra (DJKM), Senna van Walstijn (DSKM) as well as Jakob Bergmeister and Thomas Imbourg (both DSKC).

The weather caused some distractions. During Free practice on Friday and the heats on Saturday, temporary rain challenged the drivers and teams to find the right set-up. The sun was shining for the Finals on Sunday and there were summery conditions in the Erftland with temperatures of more than 25 degrees.

DKM: German victories for Niels Tröger and Juliano Holzem
A strong field of 28 drivers started at the German Karting Championship and experienced races on the highest level once again. The field was led by Mathias Bjerre Jakobsen (RS Competition) after Qualifying, but the Dane had to give up his position to Niels Tröger from the SRP Racing Team during the course of the heats. During his first employment with the Maranello-Team, the Saxon was in top condition and won the first Final on Sunday too.

He set the pace in the highest class from the start and kept his competition at bay until the finish line. He was accordingly joyous in his winner’s interview: “This was a perfect start with my new team. Everyone did a perfect job and contributed to this success.” Polesetter Jakobsen came in second in front of fellow Dane Marius Kristiansen (HK Motorsport), Arthur Tohum and Elias Olsen (KSM Official Racing Team) also from Denmark.

During the second Final, there was a change at the top. While Tröger won the start again and was able to drive off a bit in the beginning, he had to let Juliano Holzem (CV Performance Group) pass him by shortly before half-time. The KR driver fought his way to the front from the eighth starting position. Together with Moritz Wiskirchen (TB Racing Team), they formed a leading trio that crossed the finish line closely together. The KSM duo Olsen and Felix Arnold completed the top-five. Winner Holzem was overjoyed about his first ever victory: “It’s a great feeling to finally end up on top. I’ve had that chance multiple times before, now it’s worked and I want to continue like this.”

DJKM: Akshay Bohra dominates Kerpen’s kick-off
The Singaporean Akshay Bohra (TB Racing Team) celebrated a perfect debut into the German Junior Karting Championship. After a pole position at Qualifying, he also won both heats as well as the Finals and traveled home as the overall leading driver. “This was a perfect weekend. After I had won the heats, it was important to keep up the pace during the races. That wasn’t always easy, my competition was always close behind“, the Kart Republic driver summed up his weekend.

Behind the double winner, his teammate Douwe Dedecker established himself during the first race. The Belgian stayed in his wind shadow for the entire 18 laps and achieved a TB Motorsport double victory. The supposed best rookie was Jens Treuer (CV Performance Group) in third place, but a subsequent disqualification threw him back to the end of the field. His teammate Nico Lemberg inherited his position in front of best German driver Leon Hoffmann (KSM Racing Team) and Maxim Rehm (Ricky Flynn Motorsport).

Rehm assumed the role of pursuer during the second race and put a lot of pressure on Bohra. The latter kept his cool on the way to his double victory though. Third and fourth winner Lenny Ried (Lanari Racing Team) and Lemberg kept close at all times too – but weren’t able to attack. Hoffmann ended up on the podium again, on fifth place.

The high power density was already noticeable during Qualifying where seven drivers broke the current lap record on the 1.107-meter long Erftlandring. The new record holder is polesitter Valtanen with a time of 41.272 seconds. In the heats, Federer’s experience had an impact. The South Tyrolean was in first place of the interim rankings and achieved a perfect start into the first race on Sunday too. He still didn’t win though – van Walstijn took the lead after a couple of laps and drove towards victory. Behind him followed Valtanen in front of rookie Haanen, Federer, and Daniel Stell (NB Motorsport).

The second Final was also shaped by a narrow fight between six drivers. After 23 laps, van Walstijn was first again and achieved a double victory. “These were two tough and exhausting races. The track requires good fitness. On top of that, there were high temperatures. I’m very happy to have won twice and am now looking forward to the next races with lots of anticipation”, the leading Championship driver said in his interview. Stell assumed to role of pursuer this time and came in second in front of Federer, Laurens van Hoepen (Birel ART KSW Racing), and Haanen.

DSKC: Jakob Bergmeister and Thomas Imbourg triumphant
With a field of 27 shifter kart drivers, the DMSB Shifterkart Cup is strongly manned in its sixth season and already promised lots of excitement before the kick-off. The first pole position went to Thomas Imbourg (CPB Sport) who drove among the front field during the later heats as well. A falling out during the second race threw him back to midfield though. The new leading driver was German rookie Jakob Bergmeister (SRP Racing Team).

At the start of the first race, the youngster was still a bit cautious though, and lost a couple of positions. During the further course, he fought his way forward again and fought with Imbourg and Marvin Langenbacher (RS Motorsport). Five laps before the end of the race, the Rhineland resident then prevailed and won. “I’m very content with my first Shifter kart weekend at the DKM. This victory was a huge success, but I still have to work on my starts. Now I’m looking forward to Wackersdorf and want to further improve there”, Jakob rejoiced at the finish line. Behind him on the cup ranks followed Imbourg, Langenbacher, Yannik Himmels (SRP Racing Team) and Linus Lagerström (Solgat Motorsport).

The second final race got turbulent. Bergmeister did not have a good start again and lost his lead to Imbourg. The Sodikart driver knew how to use his chance, defended his leading position until the end of the race, and didn’t lose his cool during a slow phase either. “This was a good DKM debut for me. The competition is very strong and these were two tough races. My victory wouldn’t have been possible without the support of my team though and I’d really like to thank them”, Imbourg summed up his success.

Behind him, there were numerous changes. During the last half of the race, his pursuers Ben Dörr (TB Racing Team), Bergmeister, and André Walter (Kart Performance Racing) were close together. The latter had started from the back of the field and fought his way forward. The ranking didn’t change though – Dörr came in second in front of Bergmeister, Karl Louis Kölschbach (SRP Racing Team), and Lukas Scherbinskas (Kart Performance Racing). Walter received a spoiler penalty and therefore didn’t end up in the top five.

The next round of the 2021 German Karting Championship will take place at the Prokart Raceland of Wackersdorf, two weeks before the FIA Karting European Championship – KZ/KZ2/Academy Trophy.