Antonelli and Patterson take their first poles in Kristianstad. 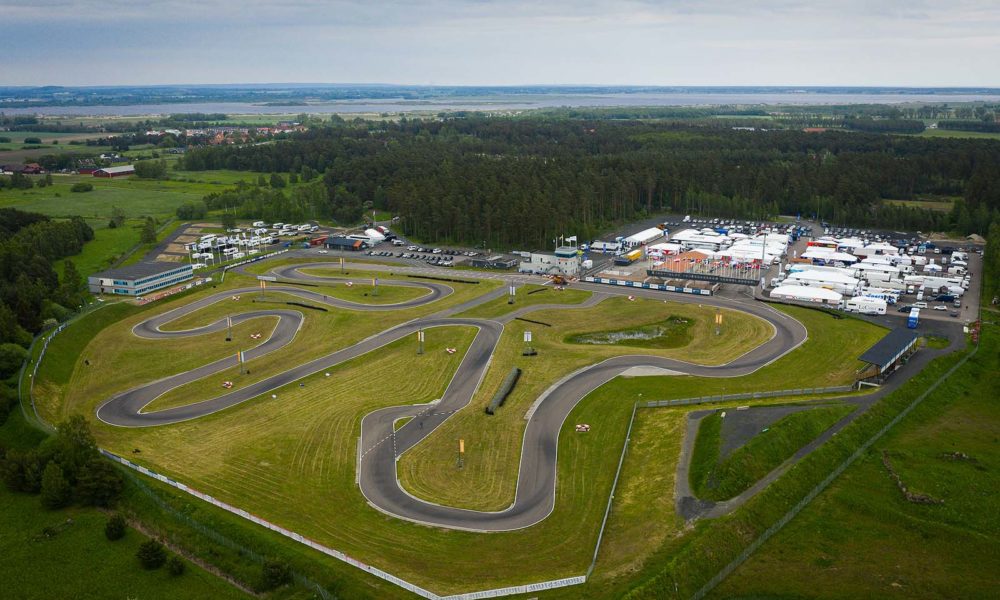 The weather of Friday 31st May gave a glimpse of what Sweden’s weather could do to the participants of the FIA ​​Karting – OK & Junior European Championship on the Kristianstad circuit. Light persistent rain, a dry track and clear sunshine followed each other to give a wide range of grip conditions depending on the tyres and settings used. With all Qualifying on a dry track, Qualifying Practice ended with the first Pole Positions for Andrea Kimi Antonelli in Junior and Dexter Patterson in OK.

The third of the four Competitions of the FIA ​​Karting European Championship – OK & Junior gathered 157 Drivers at the Åsum Ring, for the first official day dedicated to practice, after two days of free test sessions on Wednesday and Thursday. Grey and slightly rainy in the early morning, the weather suddenly cleared before the lunch break and the temperature rose at once despite the continual breeze which ended up giving a cooler feeling in the afternoon.

For the first time, the last Free Practice sessions of the early afternoon were held according to the formation of the Qualifying Practice that followed. A good idea to streamline the schedule of the competitors and allow them to better prepare for their timed session, where the OK and OK-Junior categories alternated their track sessions. The presence of four groups in each category limited the number of Drivers on the track (23 in Junior and 17 in OK), which also allowed them to find space more easily for clear laps.

The management of this important phase saw the Drivers enter the track as late as possible, the best performances being often achieved between the second and the third lap, on Vega tyres for the Juniors, and two or three laps later with the LeCont tyres for OK. The grip of the track changed very slightly, the times were increasing in Sessions 2 and 3, before improving in the last. 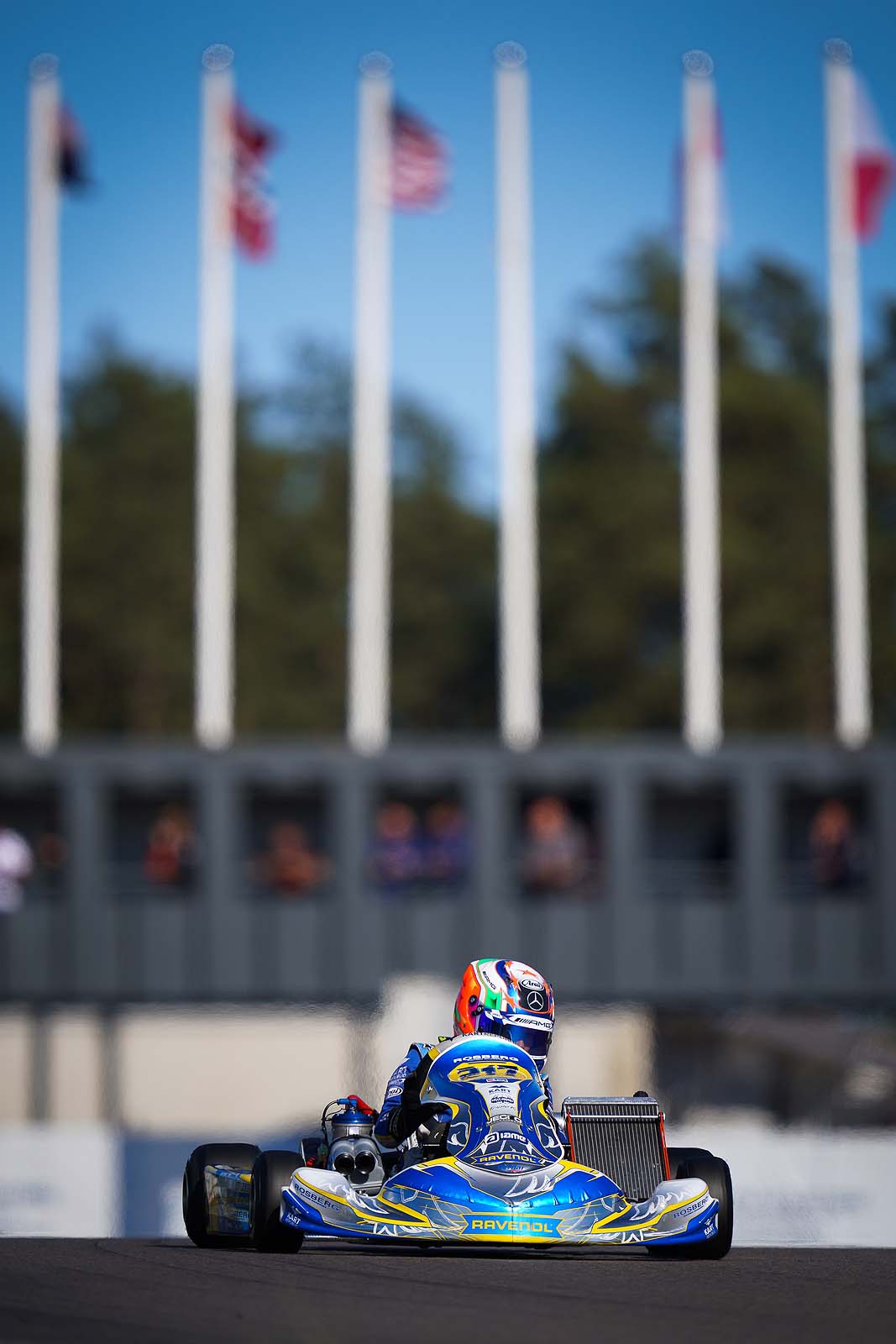 Junior: Antonelli an impressive poleman
Friday’s OK-Junior Free Practice saw Jamie Day (ARE) on 52”271, with Arvid Lindblad (GBR), Timoteusz Kucharczyk (POL) and Andrea Kimi Antonelli (ITA) the fastest in their groups respectively, shortly before the start of the Qualifying Practices, which ran from 17:00 to 18:40.

Antonelli started last in Session 1, but already had the fastest time on his first lap and improved again on his second lap to win pole position with 52”247. Theo Wernersson (SWE) and Kajus Siksnelis (LTU) followed him by more than a tenth. Rafael Chaves Camara (BRA) applied a similar strategy to be the fastest in Session 2 – 52”511 – against Marcus Amand (FRA) and Kucharczyk. Cristian Bertuca (ITA) had the best performance of the third group with 52”573, followed closely by Philip Victorsson (SWE) and Alfio Andrea Spina (ITA). But the surprise came from the fourth session with a time of 52”309 from Tuuka Taponen (FIN) ahead of Karol Pasiewicz (POL) which took them to 2nd and 3rd place overall. Wernersson finished 4th and Siksnelis 5th ahead of Nikita Bedrin (RUS), while the very young rookie Maxime Furon-Castelain (LUX) stood out in 7th place. 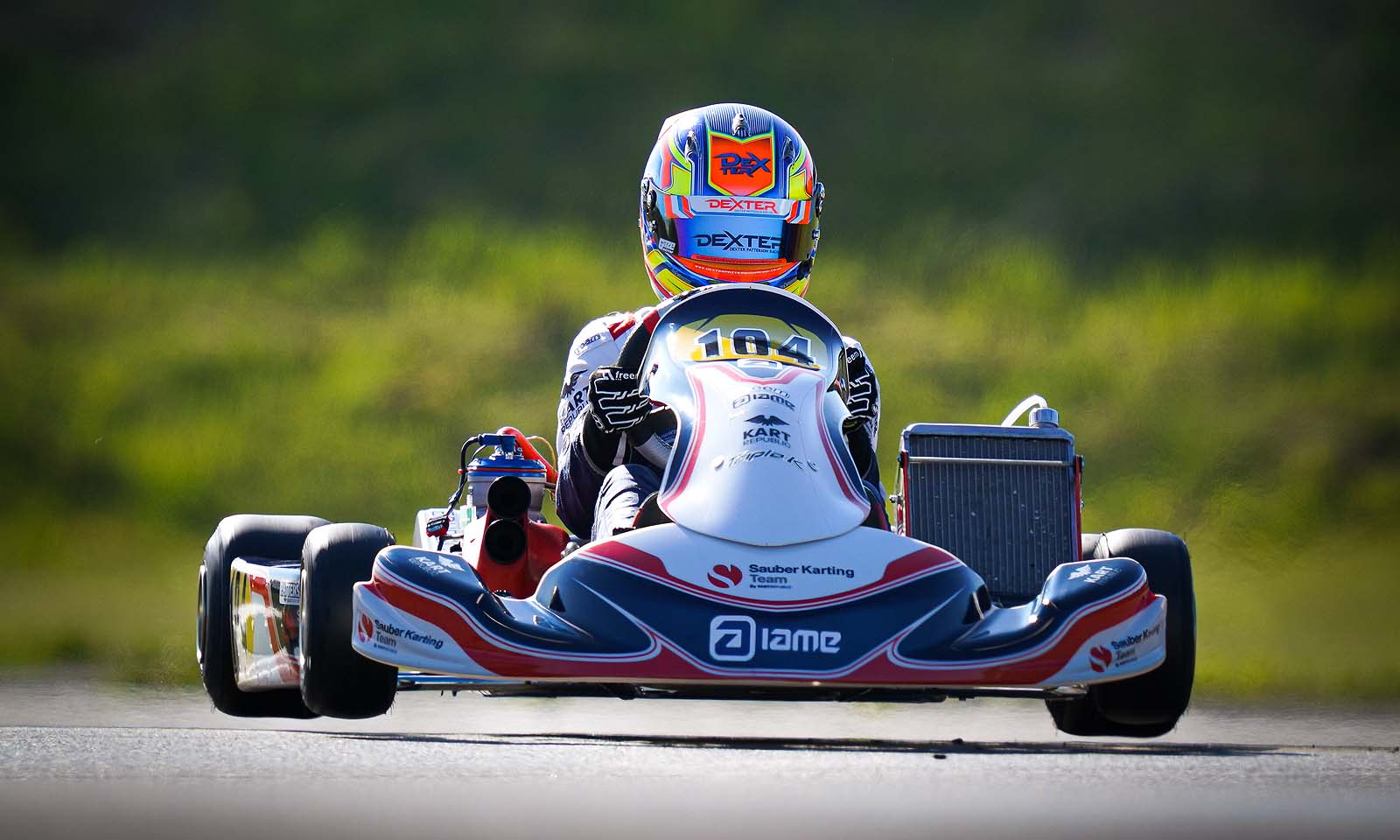 Patterson battled with Mini’ in the first session, but took a slight advantage with a superb 50”328 lap that was to remain the benchmark. Axel Saarniala was in 3rd position. Kirill Smal (RUS) was particularly brilliant in Session 2 against Luigi Coluccio (ITA) and Guilherme De Figueiredo (BRA). Mikkel Hojgaard was 2nd in Session 3 ahead of Felix Arnold (KR / Iame) and Franck Chappard (DEU). The last session, as in Junior, was to create the surprise. Travisanutto, the leader of the fourth session, managed to approach Patterson’s pole position time by a hundredth to give himself 2nd position overall. Dino Beganovic (SWE) took 2nd place in the session and 4th in the standings while Barnard finished 3rd in this session.