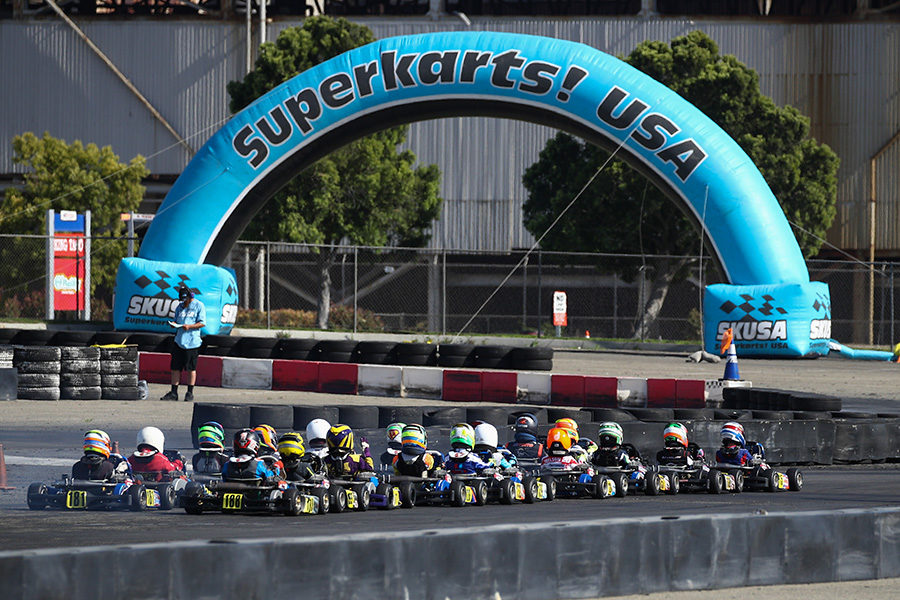 The California ProKart Challenge is preparing for a return to the track after two months off following the 2019 opening event at Buttonwillow. The flagship regional program for Superkarts! USA returns to the site of the 2019 SKUSA Pro Tour WinterNationals with a unique and first ever dual-round weekend, as Rounds Two and Three will be contested on the June 7-9 weekend at the CalSpeed Karting facility.

Competitors will compete in a similar format to the Pro Tour, with optional practice on Friday, and then two separate race days on Saturday and Sunday. The track layout will be different from the March weekend, with competitors set to battle around the ‘Tecnico’ circuit. The weather is forecasted to be perfect racing weather, and the turnout is expected to be the biggest of the season.

Musgrave had a near sweep of the Rolison Performance Group X30 Senior division as well, losing out to three-time defending SKUSA Pro Tour champion Ryan Norberg. He and Musgrave are tied for the top spot in the championship standings after one round. Cole Morgan had his sweep of the Nash Motorsportz X30 Junior division interrupted by brother Carson. Cole took fast time in qualifying and won the Prefinal, before Carson grabbed the main event victory. They hold the top two spots in the championship chase heading into the weekend. Jesus Vasquez Jr. was shut out for the win in the Prefinal to take away his possible sweep of the Ace High Designs Mini Swift class. Vasquez won the main event, however, and leads the championship chase after Round One.

The Doran Motorsports Group KA100 Senior and Allen Berg Racing Schools KA100 Junior categories made their series debut with the California PKC program at Buttonwillow. Nick Persing and Branyon Tiner were the inaugural winners respectively, and become the benchmarks for the next two rounds. The International Kart Federation-sponsored KA100 Master division also made its debut with the series, as Ron Jenkins took the inaugural victory at Buttonwillow. Steve Martin (Empire Karts X30 Master), Jacopo Pizzinato (Honda Racing/HPD S3 Novice Stock Moto) and Ansel Baldovin (Evinco Tires S5 Junior Stock Moto) round out the winners from Round One.

Pre-Entry is open and highly recommended for the dual round of the California ProKart Challenge at CalSpeed. The deadline for online registration for the event is Tuesday, June 4 at 11:59pm PDT. California PKC is providing a special discount for competitors who race the entire weekend AND pre-register – a flat $200 race entry fee to race both days ($125 if you want to run only 1 day), and then $200 per set for your ‘stamped’ race tires. A SKUSA membership is required to register and compete, and the Friday ‘optional’ practice day is $100 per driver. Move-in for the weekend in Fontana begins on Thursday morning at 9:00 am, and the registration desk will open at 3:00 pm for ‘Early-Bird’ check-in. Pit spot reservations are also highly recommended, as the pit map will surely be maxed out and walk-up pit spots will be scarce. Head to the following link for the pit map and reservation details, including onsite camping options. Complete race and venue information, along with a tentative weekend schedule, can be found at the California PKC Event Page.

About Superkarts! USA:
Established in 1995, Superkarts! USA is dedicated to shifterkart and TaG racing, and is the leader in the field, promoting three regional racing series. Racing programs are currently running in California, Florida, Hawaii, Indiana, Illinois, Nevada, Texas and Wisconsin, in cooperation and support from official tire supplier MG Tires and the Evinco line of race tires. In 2019, the organization is promoting the 10th edition of the SKUSA Pro Tour, which features the WinterNationals, SpringNationals and SummerNationals. All of it leads up to the 23rd running of the annual SKUSA SuperNationals – the biggest kart race in the world – held every November in Las Vegas, NV.