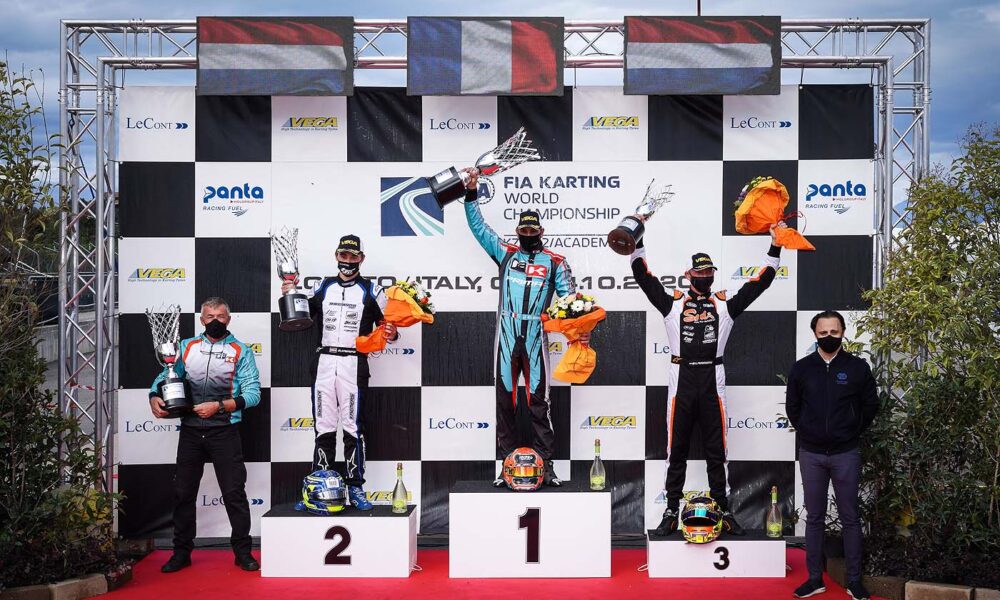 This time, the weather didn’t disrupt the racing, although the few drops that fell on the starting grid of the KZ Final raised doubts for a moment. The last Qualifying Heats held in the morning had decided the list of finalists. The Academy Final was undoubtedly the most exciting with its changes of leaders and many twists and turns, with Ariel Elkin was the first Israeli to win an international FIA Karting race. The victories of Cunati in KZ2 as well as Iglesias in KZ rewarded the best in each category at the end of very high quality sporting competition.

Cunati clinches KZ2 Super Cup.
The hierarchy of the FIA Karting International Super Cup – KZ2 evolved during the last Qualifying Heats and because of a sanction against Viktor Gustavsson (SWE – Birel ART/TM Racing/Vega) concerning a heat on Saturday: a disqualification for coming in underweight. Simone Cunati (ITA – Birel ART/TM Racing/Vega) was on pole position for the start of the Final and was able to exploit his advantage throughout the 25 laps. Chased by Arthur Carbonnel (FRA – Sodi/TM Racing/Vega) on the third lap, he responded and flew away to a clear victory with an advantage of more than 1.5”. The FIA Karting Vice European Champion – KZ2, Cunati was racing with a private team, Modena Kart ASD, and managed to stay ahead of several factory teams.

The contest for the top places was intense. Giuseppe Palomba (ITA – Birel ART/TM Racing/Vega) started in seventh place, reached second position on lap 9 and kept the pace until the end. He was second, 4 tenths ahead of Giacomo Pollini (ITA – Formula K/TM Racing/Vega). Leonardo Marseglia (ITA – Birel ART/TM Racing/Vega) recovered his fourth position after some difficult first laps. Danilo Albanese (ITA- KR/Iame/Vega) had a good race, moving up from 17th to fifth place. Six Italian drivers finished in the top six. The 12 drivers who didn’t reach the finish line attested to the closeness of the racing.

Victory for Elkin, Zilisch crowned in the Academy.
The 2020 FIA Karting Academy Trophy was won by the Connor Zilisch, but the competition was nonetheless very lively for the 31 participants at the wheel of their one-design Exprit/Vortex/Vega karts.

Aleksander Gubenko (RUS) started on pole position and took the lead from Matteo De Palo (ITA). Connor Zilisch (USA) and Macéo Capietto (FRA) retired after an incident. Meanwhile, Ariel Elkin (ISR) started a magnificent comeback from 11th position. He managed to place a decisive move on the last lap to cross the finish line as winner, a first at this level for his country. De Palo and Gubenko accompanied him on the podium, while Rafael Modonese (PER) and Théo Micouris (GBR) completed the top five.

Iglesias finally rewarded at world level.
Titled last year on this same circuit, Marijn Kremers (NLD – Birel ART/TM Racing/Vega) shared the front row of the starting grid of the FIA Karting World Championship – KZ with Jeremy Iglesias (FRA – Formula K/TM Racing/Vega). The start was postponed by ten minutes to allow a brief rain shower to pass. Iglesias started in the lead, but Kremers pursued him after a few laps. The Frenchman responded and the Dutchman had to resist the more pressing threat from his compatriot Bas Lammers (Sodi/TM Racing/Vega) and Fabian Federer (ITA – Maranello/TM Racing/Vega). Iglesias took advantage of this to pull out a gap of about a second which he managed until the finish line. He won on behalf of the official Formula K team against Kremers, Lammers took third place and Federer finished fourth. Riccardo Longhi (ITA – Birel ART/TM Racing/Vega) finished fifth, followed by Stan Pex (NLD – KR/TM Racing/Vega) after a nice nine-place comeback.

The negative hero of the racing weekend in Lonato was Italian Luca Corberi, who after leaving the competition by racing incident, acted unworthily as an athlete, first trying to throw a bumper at one of the rivals (during the race!) and then caused a fight in a park ferme.