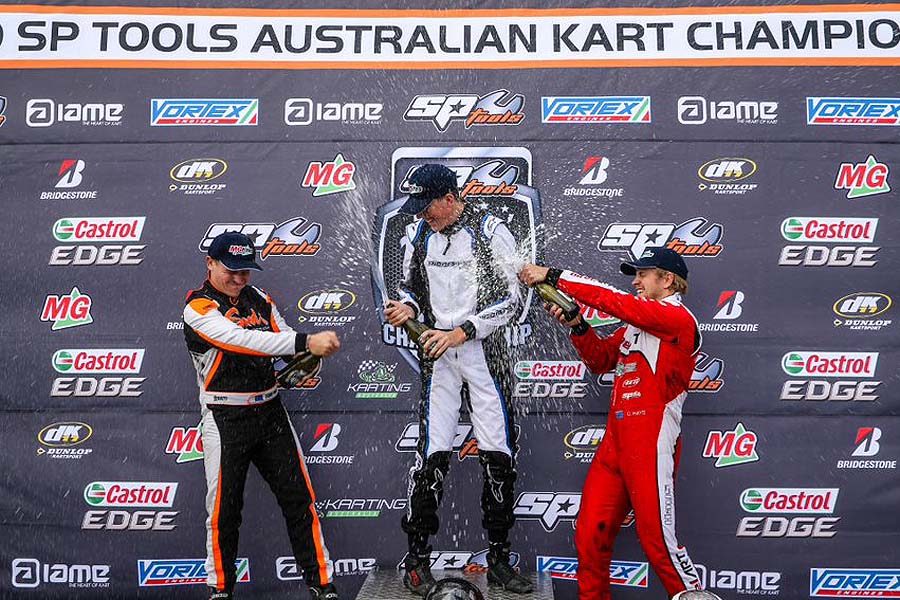 Championships to go down to the wire in Melbourne on August 30-September 1. A tremendous day of racing at Emerald has setup a blockbuster SP Tools Australian Kart Championship Grand Final at Todd Road in Melbourne on the last weekend of August with four Finals on Sunday decided by mere hundredths of seconds.

The Australian KZ2 Championship is well and truly alive after runaway Championship leader, Troy Loeskow seized the engine on his Ricciardo Kart in the early stages of the final. He could only watch on as his closest title combatant, Jason Faint led comfortably in his SodiKart Australia entry – only to have more drama take place.

Gladstone’s Faint was playing a conservative game to ensure that he didn’t meet the same fate as Loeskow. This allowed a charging Matt Payne on Championship debut to close down on the experienced Faint.

Faint had no choice but to relinquish the lead to Payne and then staved off a challenge for second from BirelART’s Chris Hays and Boost Mobile/GRM Supercars star, James Golding. 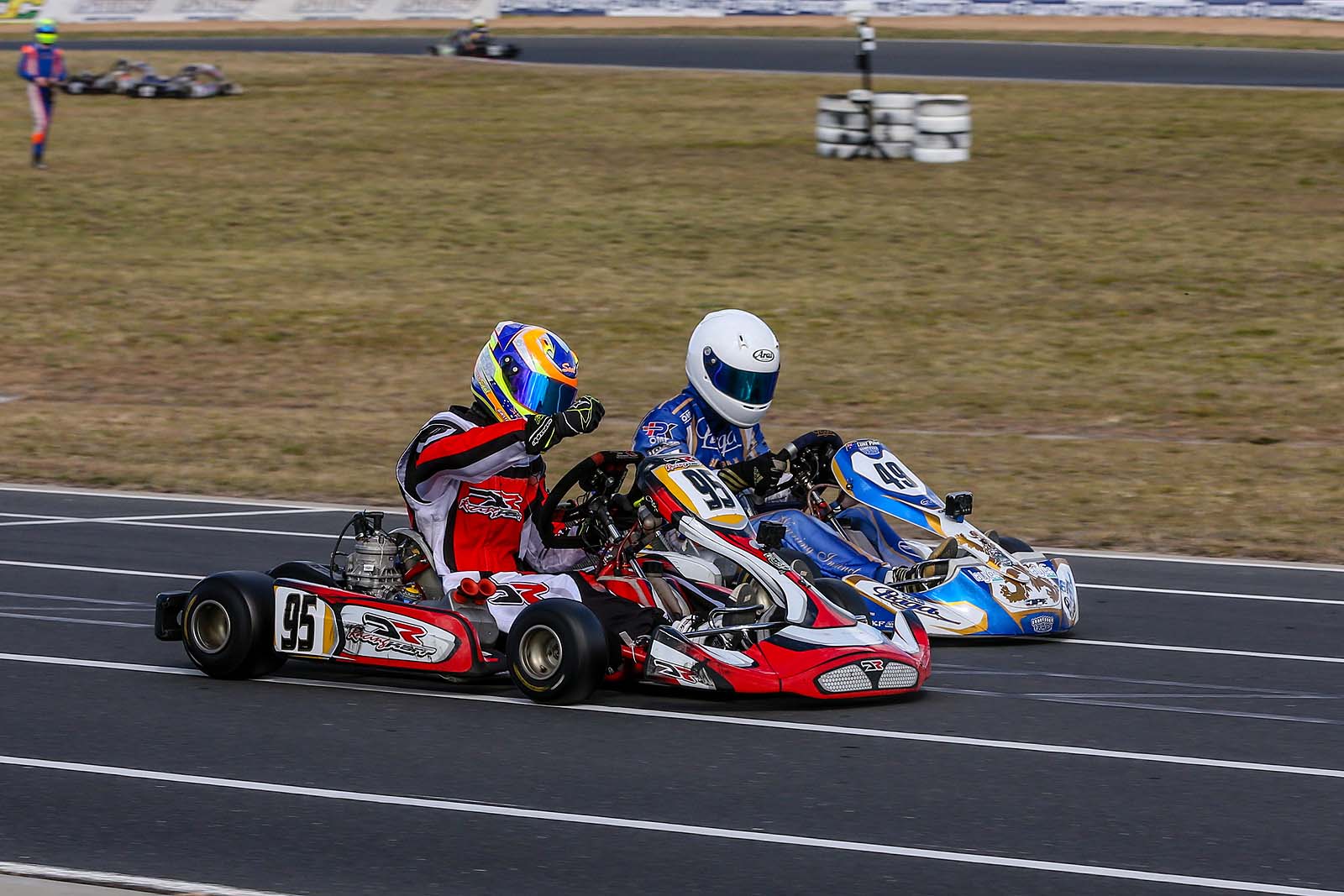 KA2 Junior provided one of the grandstand finishes when William Seal took his first KA2 win in his Castrol-backed DR Kart after a race-long battle for the lead. Seal crossed the line by just 0.029 of a second over Luke Pink, who extended his Championship lead after Fletcher Harris didn’t finish the final heat and dropped back to 17th in the final.

Ethan Feather took an emotional third placing in his Electro Parolin, honouring his Grandfather who passed away during the week. 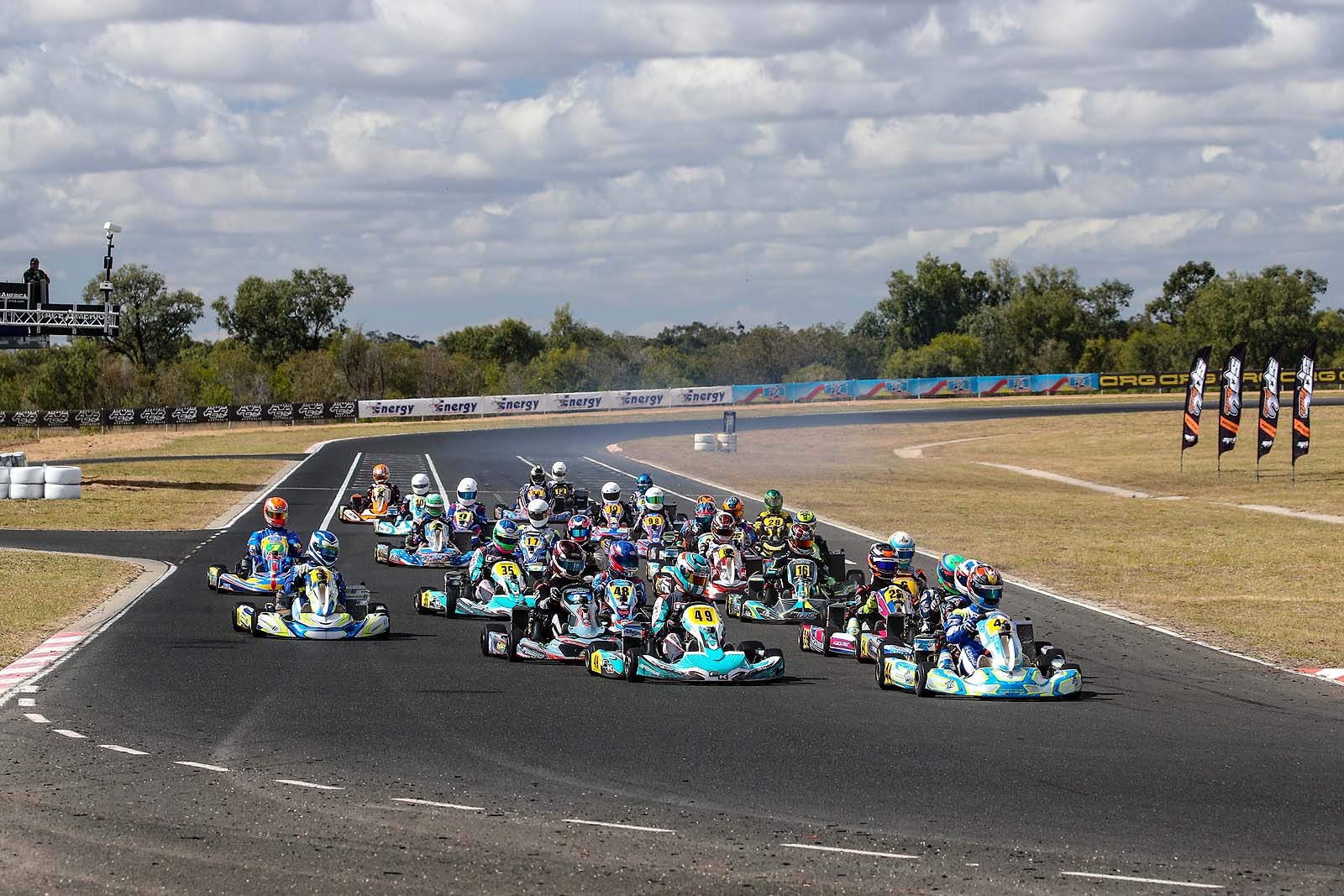 The closest finish of the day came in KA4 Junior when CompKart driver, Kurtis Tennant got his first AKC round win by just 0.01 of a second. The thrilling charge to the line saw Tennant, Hugh Barter, Christian Cowie and Championship leader, Kobi Williams come to the chequered flag line astern after a race long battle.

Dowson was driving qualifying-spec laps and closed right down with two laps remaining. He threw out the challenge, however multiple time Australian Champion Jenner was able to hold on. 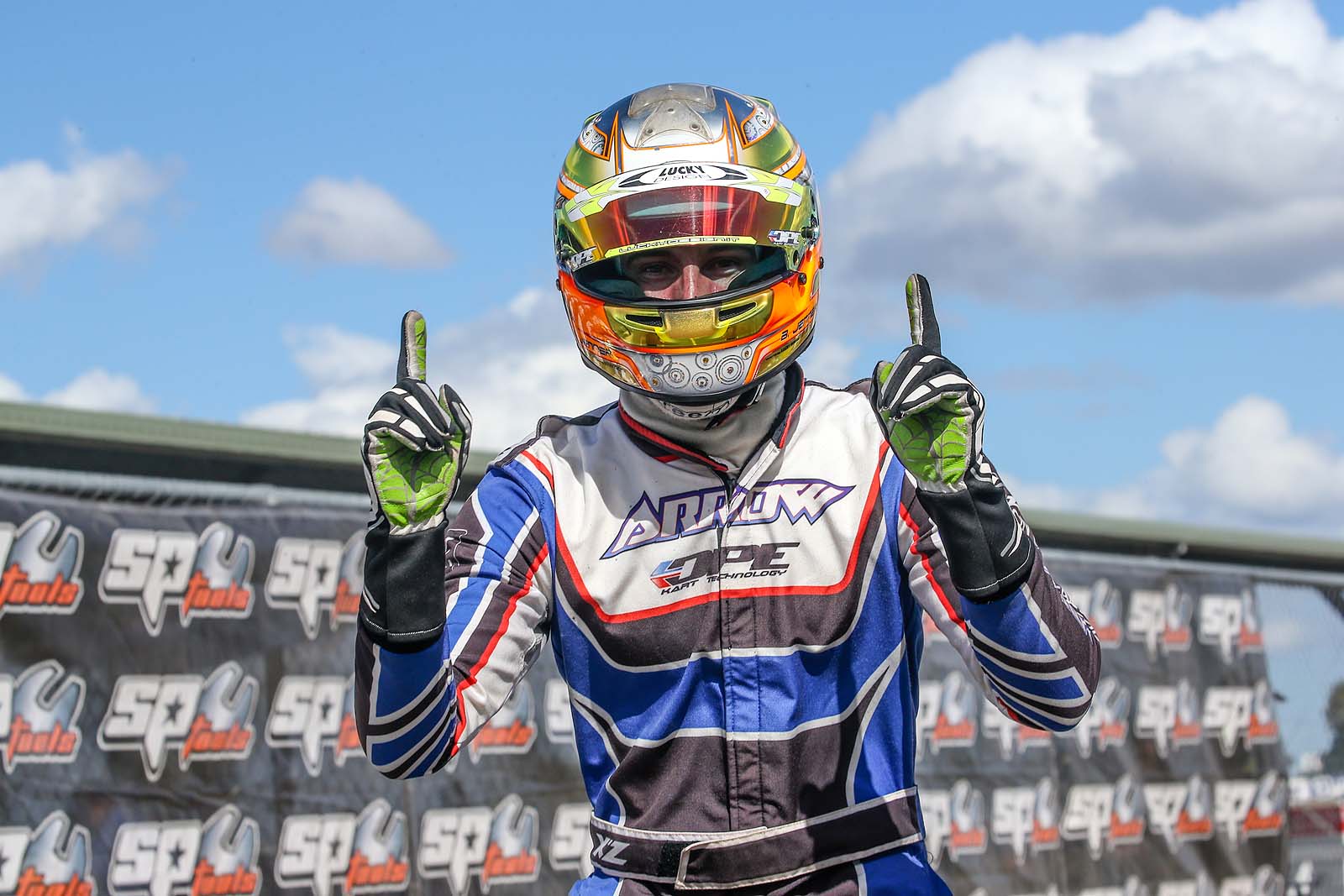 Last round winner Jaiden Pope brought his TWM Kosmic home to third placing after what had been a frantic race for the minor placings that extended right down the mid-pack, with many fancied runners finding themselves deep in the field.

Tyler Howard created the biggest margin of victory in TaG 125. The Troy Farley Race Engines driver had to do it twice however, after a red flag incident halted proceedings involving last round winner Tommy Cooper. The Queenslander was transported to hospital after the incident and has since been released after being assessed.

Howard had a lead over 1.5 seconds at the time the red flag was triggered. From the restart he was able to continue on and completed the second half of the race taking the win by 2.18 seconds. 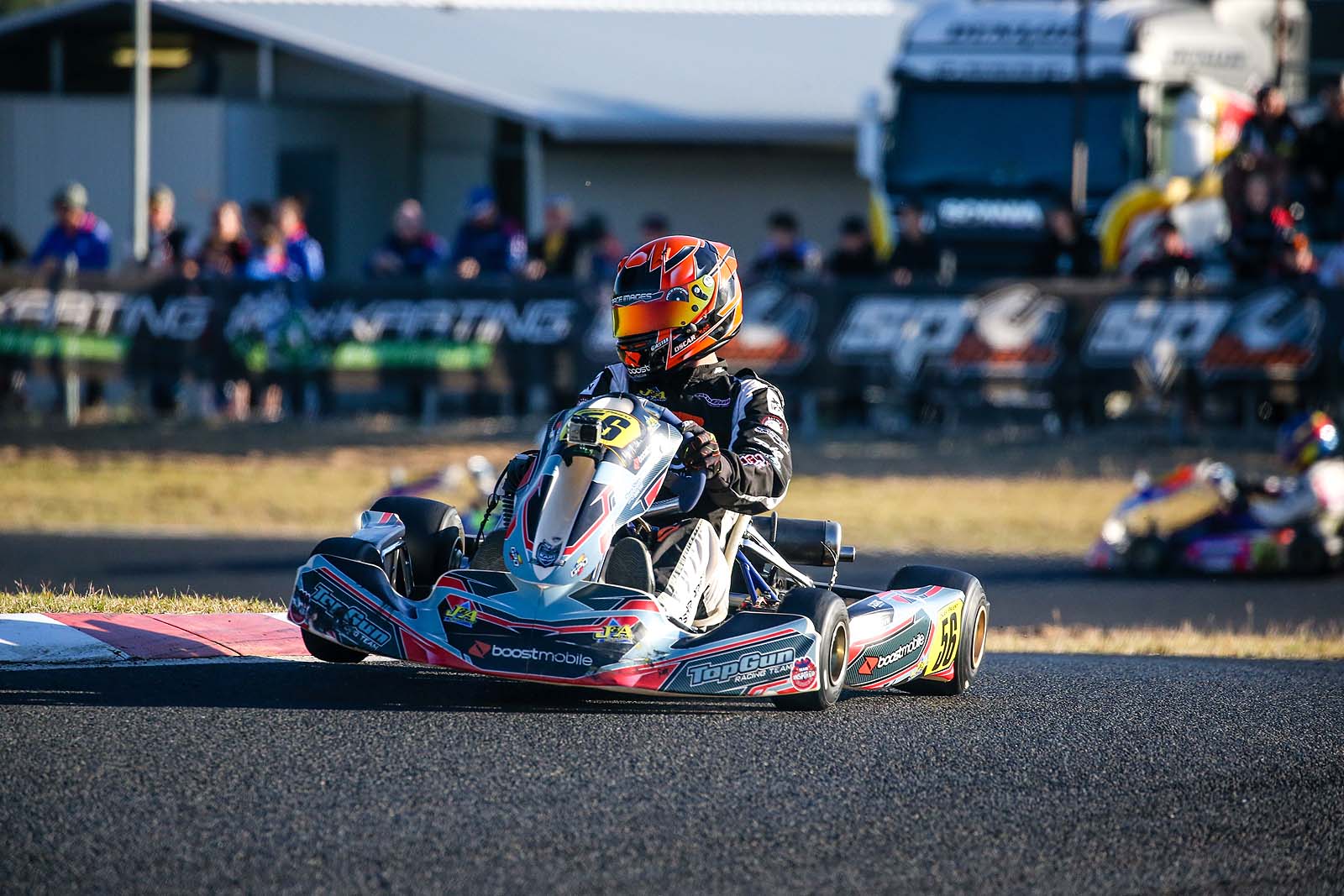 Two Championship aspirants had difficult ends to their day. Adam Lindstrom didn’t get away from second position at the restart and had to recover from the back of the field to finish 17th, while defending Champion, Brendan Nelson will be fired up come Todd Road after a weekend from hell, finishing the final in 14th position.

KA3 Senior continued to be one of the most hotly contested categories across the weekend with the Final not decided until after the chequered flag. Initially, Joel McPherson crossed the line first, however a post race infringement dropped him to third. 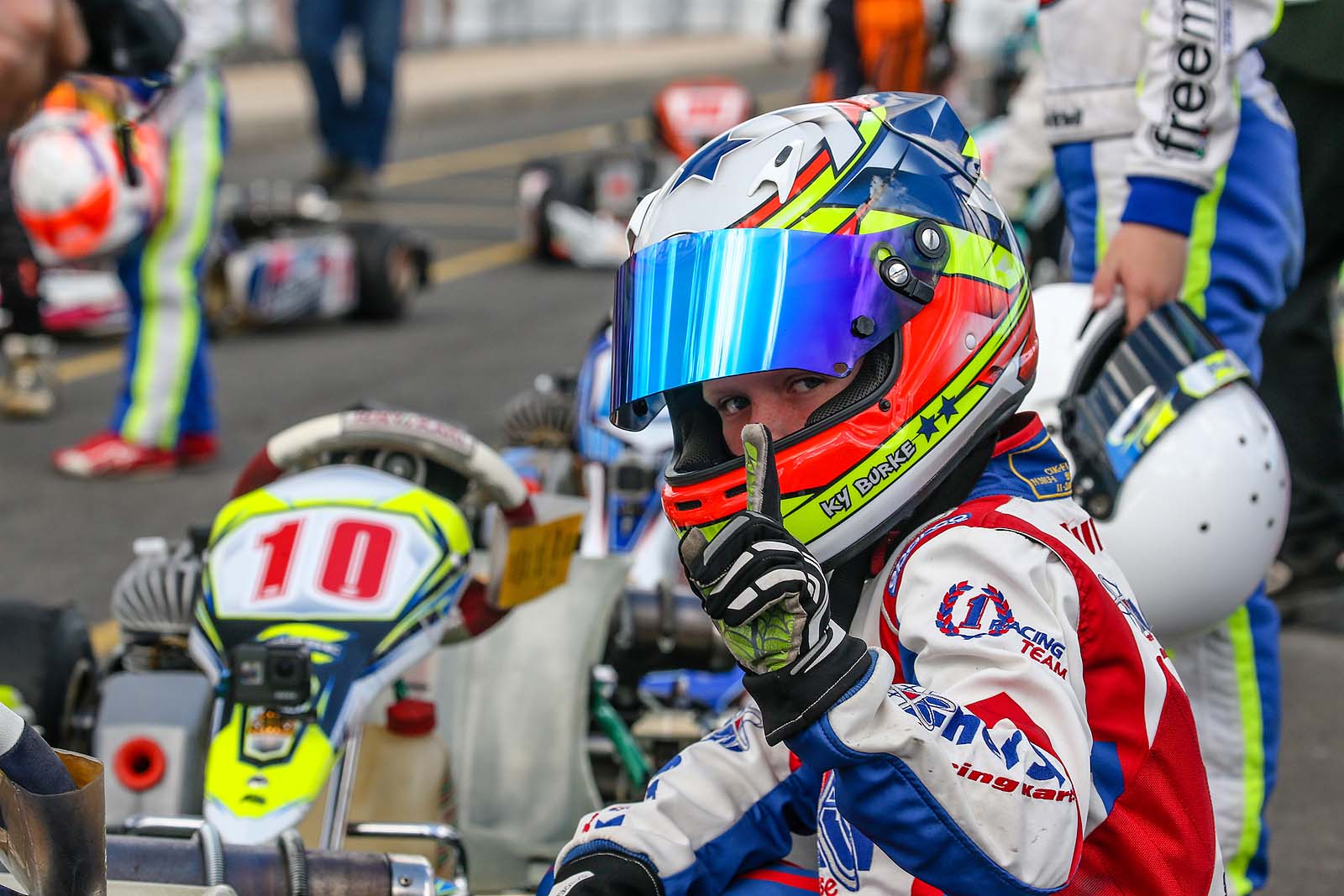 This elevated Boost Mobile-backed New South Welshman, Oscar Priest to the round victory, continuing his good run of form at the 1.006km Emerald course. He crossed the line initially in second place, 0.023 behind McPherson.

Kosmic racer Matthew Waters – who led the Championship coming into the weekend was elevated to second position, Jai Brown recovered to finish in fourth position after a difficult run in the heats and Jack Bell finished fifth in his Tony Kart to ensure the Championship stays alive headed to the final round.

By finishing sixth, Beck Connell has all but wrapped up the 2019 Ladies Trophy with one round to go.

Pro Karting Formula K Victorian, Kristian Janev secured his second round victory in a row after a spirited fight with defending Australian Champion, Harry Arnett. The pair crossed the line side-by-side after a huge final lap effort from A1 Engines-supported Arnett.

Janev got the nod by 0.031 of a second over Arnett – who overtook the Championship lead and heads to Todd Road with a healthy margin. 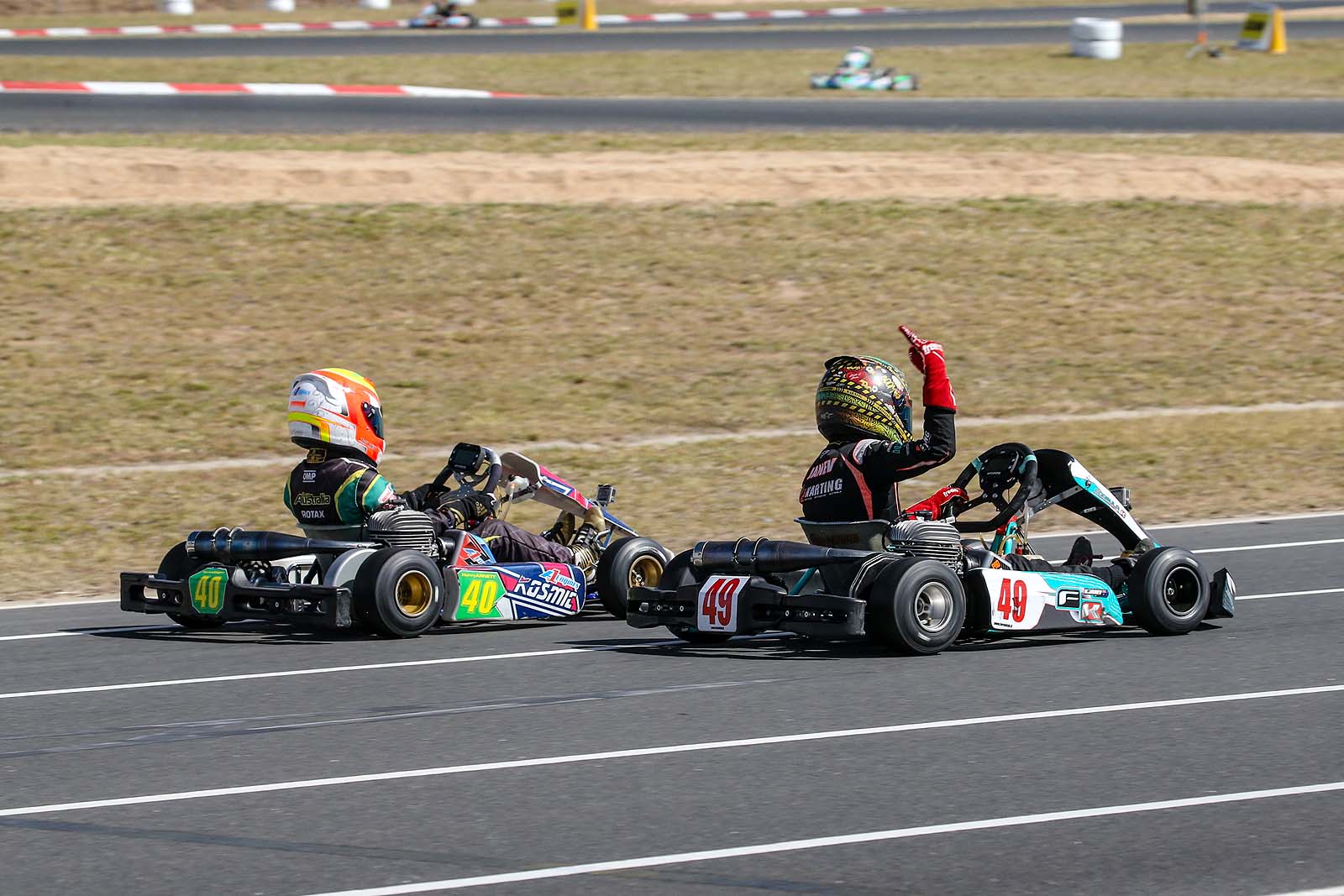 Ky Burke became the fourth winner in four rounds in Cadet 9. The Scott Burke Electrical Energy driver has been fast since the first session at Ipswich earlier in the year, however the youngster from Bundaberg hasn’t been able to convert that to a Final round win, today he changed all that.

He and Isaac McNeill got to the front of the Vortex Mini-Rok class and pulled well clear. Late in the race, it was clear it was going to be a race between the pair of them.

The Championship has several weeks before it visits the traditional Grand Final venue of Todd Road in Port Melbourne on August 30-September 1, adjacent to Melbourne city.