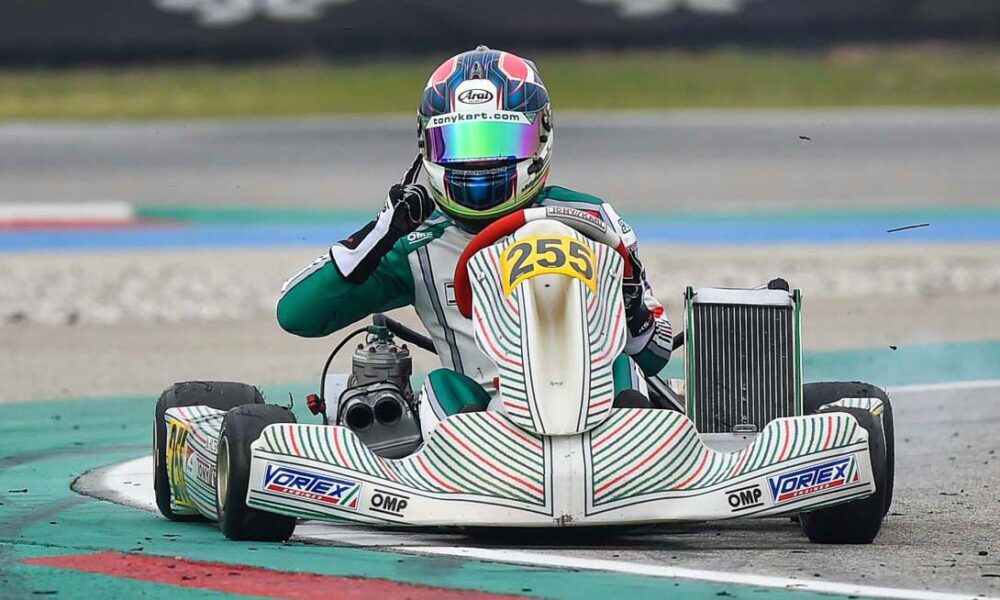 Pedro Hiltbrand wins the OK Final of the first round of the WSK Super Master Series, crowning a fantastic weekend where the Tony Kart Racing Team steps up onto the podium also in the MINI class with Jimmy Helias.

The 2020 season of the Tony Kart Racing Team begins under excellent auspices: in the first round of the WSK Super Master Series, our Pedro Hiltbrand conquers the victory in the OK class, while Jimmy Helias finishes third in the MINI. The results immediately confirm the excellent competitiveness of the Tony Kart Racer 401 R and Rookie 2020 chassis powered by Vortex engines, but our weekend at the Adria Karting Raceway could have been even more successful if the race circumstances had not compromised the performances of some of our drivers.

Pedro Hiltbrand’s success in OK comes at the end of a fighting final, in which the former World Champion makes the most of his Tony Kart chassis in the brawl to conquer top positions. A great performance allowing our driver to gain 26 position at the end of the Qualifying Heats, easily remedying a few unexpected events in qualifying.

Joseph Turney is also among the protagonists of the weekend, winning 2 heats and a pre-final. The Englishman, started from the pole position, remains in the lead for most of the decisive race, but unfortunately a contact with an opponent four laps to go forces him to give up any chances of victory. A little bit unlucky Lorenzo Travisanutto too, who is forced to close the weekend in advance due to a withdrawal in pre-final.

Excellent results in the MINI too: Jimmy Helias’ third place confirms the growth of the Frenchman, who recovers 8 positions in the Final after the great performances throughout the Qualifying Heats and the pre-final. The début of Kai Sorensen, eighth after a comeback at his debut in MINI, and the recovery of 13 positions by James Egozi, prove the top-quality of the new 2020 Rookie chassis. The performances carried out by Andres Cardenas and Jules Caranta are also very positive.

Our drivers prove to be very competitive in the OK-Junior too, where we hardly fought for the victory with Karol Pasiewicz. The Pole is the protagonist of an amazing weekend, with a victory, 2 second places and 4 best laps in the Heats and the victory in pre-final. It is a pity that in the final, Karol’s race is interrupted by the yellow flags waving for 4 laps and restart the brawl: the fourth final place, however excellent, leaves a bad taste in his mouth.

Harley Keeble and Aiden Neate are also growing, with the latter recovering 16 positions in pre-final, entering the decisive race. Here the two Englishmen are the authors of another convincing performance in which they recover 7 and 5 positions respectively. Pity for Maxim Rehm forced to withdraw from the pre-final after collecting three results in topten in the Heats.

The Tony Kart Racing Team is now preparing for the next appointment scheduled in two weeks, where we will be at the South Garda Karting in Lonato (Italy) for the 25th Winter Cup where the OK, OK-Junior, Mini ROK and KZ2 categories will take part in.