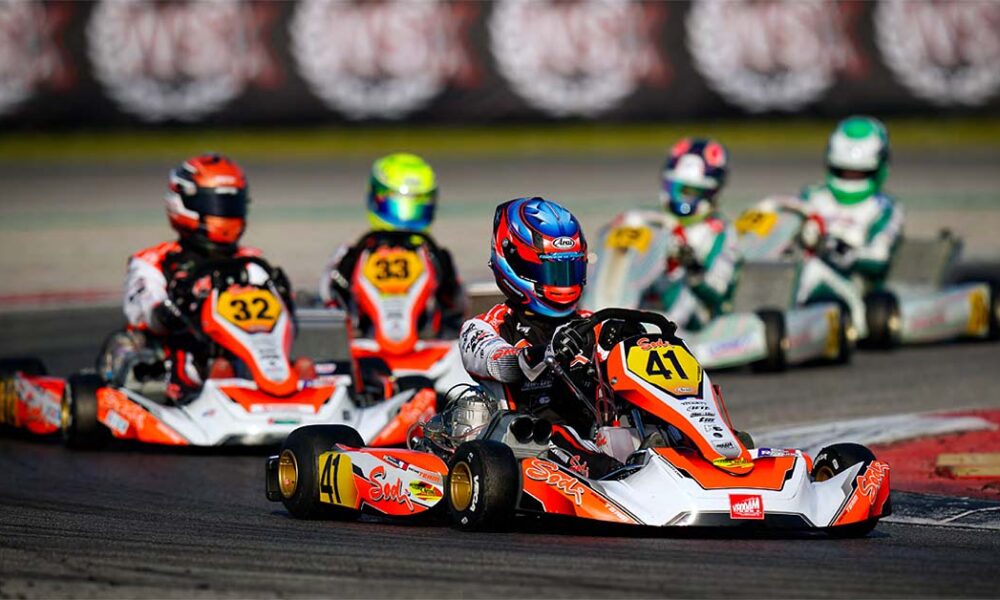 Postponed by a few weeks for safety reasons, the WSK Champions Cup has just launched the international season on the Italian circuit of Adria with more than 335 participants from 51 countries. Adrien Renaudin of the Sodi Racing Team never left the top three in the KZ2 category before finishing in 2nd position.

Five of the eight CPB Sport drivers qualified for the Final and Arthur Carbonnel reached 8th place. Meanwhile, under the responsibility of Jean-Philippe Guignet, the youngsters experienced a baptism of fire in the official Sodikart structure, with the chance to benefit from the advice of Bas Lammers.

Julien Dexmier, manager of the Sodi Racing Team, commented: “The weekend proved to be very interesting with strong participation. The circuit of Adria is very particular, especially with its bumpy track, and does not favour our chassis, especially for the younger ones. Nevertheless, the work done at the end of last season paid off and the performance was already there. In KZ2, the close collaboration with CPB Sport is perfectly effective. Adrien Renaudin had a very good, calm meeting. All of the CPB Sport drivers were satisfied with the competitiveness of their equipment. We can regret that the crash in the Final for the very fast Senna Van Walstijn prevented him from fighting for the podium in the end. The 8th place for Arthur Carbonnel confirms his strong potential. In the Junior class, our drivers still lack experience, but the equipment works well and they are there to learn. Finally, Louis Cochet’s speed in Mini was really good for an almost novice driver, which is very encouraging for the future.”

Renaudin already in great shape.
Adrien Renaudin immediately revealed himself as one of the best KZ2 drivers of the WSK Champions Cup which gathered 54 riders for the opening of the season. The 2018 European Champion started by taking pole position and continued at the head of the Qualifying Heats. Slightly delayed at the start of his Prefinal, he fought valiantly in the Final to come back to 2nd position on the finish line. Adrien therefore revealed his competitiveness and that of his Sodi / TM Racing from his first competition, a strong sign for the 2021 season that is about to begin.

CPB Sport maintains its excellent reputation.
Making common cause with Adrien Renaudin, the eight drivers entered in the Sodi / TM Racing karts of Paul Bizalion’s team were able to take advantage of top class equipment. The Dutchman Senna Van Walstijn was 7th fastest in the Timed Qualifying sessions and was fighting for 4th place in the Final when an incident caused him to drop back and deprived him of a possible battle for the podium. There is still one driver left to watch this season. Arthur Carbonnel managed to come back to 3rd in his Prefinal before finishing in a very promising 8th place in the Final. Starting far back, Thomas Imbourg completed the best race of his young career in KZ2 thanks to his last two heats in the top 10. He continued to improve in the Final stages and finished in 16th position. Brad Benavides had started strongly and finished 9th after the heats, but he had to retire in the Final, as did Marco Valenti.

Baptism of fire in OK-Junior.
As Jean-Philippe Guignet expected, the first race for the young OK-Junior recruits wasn’t easy. The management of Qualifying with only two laps to use the tyres is not yet familiar to them. The intensity of the battles in the pack is another parameter to be integrated for them. Cathal Clark didn’t start as far back as his team-mates and he was able to reach the Prefinal despite some difficult laps. Arthur Dorison was burdened with three spoiler penalties, while Nathan Tye Jnr. made a good comeback after two retirements.

Interesting debut in Mini.
Louis Cochet did well in his first international event. Despite his limited experience in racing, he showed good speed in a category new to Sodikart.

The Sodi drivers will be back on track in Adria next weekend for the start of the WSK Super Master Series. This time Bas Lammers will be racing alongside Adrien Renaudin to prepare the European KZ Championship, which will start in Adria in two months time.