Alex Goldschmidt: We do our utmost to give karting the coverage it deserves. 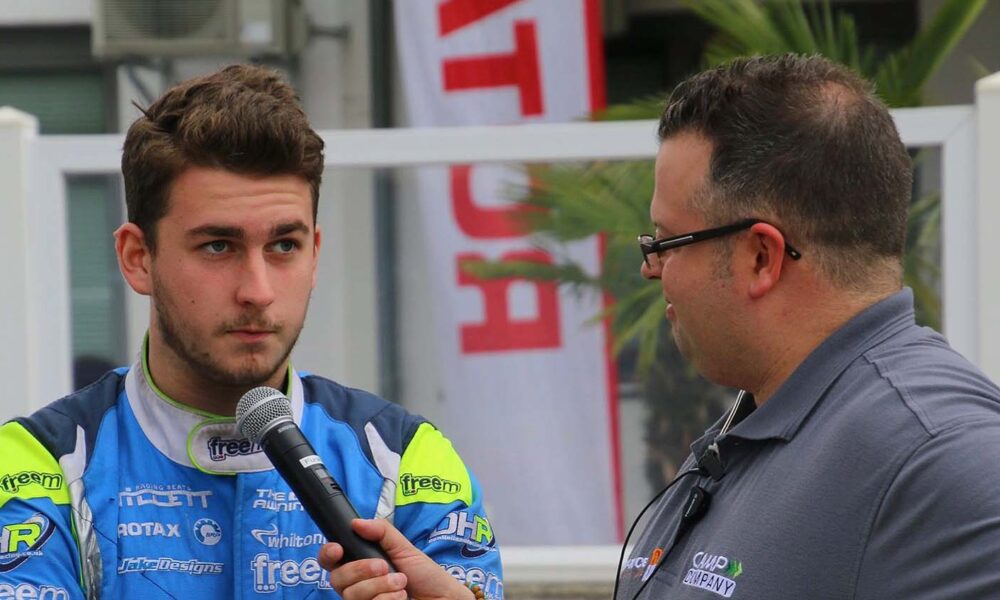 Alex Goldschmidt: We do our utmost to give karting the coverage it deserves.
P S

His voice is heard on live broadcasts from the BNL Karting Series and Rotax Euro Trophy and many races in Great Britain. Alex Goldschmidt is today one of the most recognized karting commentators. He is simply in love with karting: „I’m just enamored with it all, and the moment I get to a race track for a race weekend, the hairs stand on the back of my neck.”

First of all I’d like to ask you about RMCGF Mini final… It was very exciting race, full of extra ordinary moments. How do you remember that race?
Yes, that race. It was a final that had to be seen to be believed. Both myself and Henry Beaudette were on the edge of our seats the entire time. Hands down, it was the best race I’ve commentated on all season, and I’ve done my fair share this year. It had twists and turns, dramas and so much action.

How did it happen that you became a commentator on kart racing? Tell us your story.
Firstly, I have to thank both Jake Sanson and Chris McCarthy, as they were the pair getting me involved, most notably in 2017. I met Jake in 2015, joining Downforce Radio that year, and did some commentary on different classes of racing, from trucks to cars and a few others. But it was karting that really got me hooked, as it gave me a chance to really be on the balls of my feet, thanks to the Daytona DMAX championships, along with working as a commentator at Rye House, where Lewis Hamilton started his career a long time ago. Then in April 2018, a call from Chris really changed things even further, when he asked me if I wanted to go to Genk and just be there for one race weekend. So I thought, why not? That weekend changed my life for the better, and now as they say, “the rest is history.”

What is so attractive in karting? I mean what makes to fall in love with it at first sight?
It’s all about the atmosphere! The smell of fuel, rubber, exhaust smoke and the welcome I get whenever I head back into the paddock. Plus getting to know the people, families, teams and hearing so many interesting life stories. Plus, don’t forget, the racing.

You are one of the few karting journalists. There are few of us in Europe who talk and write about karting and commenting. Can you say about the narrow specialization of this profession? What distinguishes a karting journalist from others? Is there such a thing?
What distinguishes us is our passion about the sport itself, as it’s easy to get blinded by other outside factors. It’s about seeing those new talents once in a generation that could go on to such great things. Including the fact that so many drivers in F1 now have come through the ranks of karting, including Verstappen, who just won in Brazil, LeClerc, Gasly and so many others. I’m just enamoured with it all, and the moment I get to a race track for a race weekend, the hairs stand on the back of my neck.

The race you remembered most of all?
That’s a difficult one to be honest. That’s like trying to choose between your children, but there are moments I remember that I won’t soon forget. Maybe top three moments?

Ok, tell us about three favourites.
The first lap battle in the wet for the final race of the DD2 class at Genk between Xander Pryzbylak, Dionisis Liveris and David Rehme, where the lead changed multiple times. Second one is Finland’s Axel Saarnialla stealing the win in the second Final at Kristianstad from eventual champion Mathilda Olsson on the final corner. The third and biggest one was Macauley Bishop being the first ever GB Micro Max competitor for the Rotax Grand Finals this year, and he finishes second.

What karting should occupy a place in motorsport. Don’t you think that there is too little talk about it, in Europe?
Definitely. Karting is a class that showcases a lot of talent, and has done for so many years. For example, there are so many drivers that have come from karting, who have risen up the ranks. It should be celebrated, especially if anyone remembers the race in Bercy in 1993 between Prost and Senna. It’s also a great training foundation for so many drivers in higher ranks that don’t have the chance to test. There should be more talk about karting.

I’m listening to the EKN Supernats podcast now. In Europe, there is no journalistic setting that breaks down the karting competitions, no such atmosphere is built before the competition. Do you think it should be the domain of organizers or go-kart journalists? Let’s skip the topic that they are Americans. In the US there is always a place for everything in matters of promotion.
When it comes to awareness, it should be the duty of both the promoters/organisers and the journalistic fraternity. We all love the sport and do our utmost to give karting the coverage it deserves. Hence why I am doing a lot of work on the championships I am currently commentating on behind the scenes, along with even the UK and Ireland ROTAX distributor, JAG Engineering.

Let’s return to the topic of talents in karting. Have you followed the last WSK Final Cup Mini 60 final?
Russia seems to have a lot of talent that always makes its way through karting, take for instance Daniil Kvyat – raced in Italy as well.

Karting prepares many drivers for a motorsport career and is the first step in a racing driver’s career. But don’t you think that money plays a greater role in creating motorsport stars today?
Money does take a precedent nowadays in racing, as I’ve heard parents have been spending quite a few Euros for a season of karting with some of the top teams. Motorsport has gone from being not just a talent showcase, but it has become business-orientated. But not only that, a famous surname is also very helpful, especially if there are doors that are not easily opened, even if you have the sponsorship funding ready.

Are you interested in karting in Central and Eastern Europe? What can you say about drivers from countries such as Poland, the Czech Republic, Hungary…?
At the moment, my prime focus is Euro Trophy, BNL and now Germany for 2020, but there are some good talents in Poland, the Czech Republic and other countries in Eastern Europe. Oli Pylka has come alive in the Euro Trophy this year, having switched to DHR. Kacper Tomalewski has been on a steep learning curve in Honda Cadet this year, running in the Motorsport UK British Kart Championships in the Honda Cadet Cup, and I’ll be looking forward to catching up with him and the family at the Bambino Kart Club Winter Cup on December 15th at Whilton Mill. Czech Republic – both Jakub and Petr Bezel have been very impressive indeed in DD2, and one of my favourite DD2 Masters drivers, Slawomir Muranksi, has done his best to defend his title in the Euro Trophy, but I know that it’s been a difficult year for him. They add their own flavour to the karting world, and it is a pleasure to know some of them.

Do you know the Polish 303 Squadron team racing in Great Britain? Maciek Hamera just won Super One Series this year.
Yes, I know of them. Maciek has done a really good job this year too. Running in Junior ROTAX in MSUK BKC too.

What do you think about the UKC series that is being created in England now? What can we expect from this series and how will this affect karting in the UK?
I’m not sure about it, in all honesty. There is plenty of choice for drivers, but I’m not going to write off the championship before it even gets going. It will need to have a lot to offer, how it goes about the organisation, coverage, social media and so much more, as there are so many drivers that I know of through the UK that race regularly over in Europe. Whether it is going to be a success, is anyone’s guess, so they’ll have to come flying out of the blocks with something that could break the mould.

What is the situation of karting in the UK today?
It is still rather strong, with many categories being run by independent organisers, so independent karting regulated race series are flourishing, with Motorsport UK looking to build on their first season. There will always be a demand for a variety of karting, whether it is arrive and driver, driver/owner series, endurance pro karting, and so much more. we even have the Spirit of the 90s F100s that even have the classic karts from so many different eras racing across the country.

But the only newspaper, the oldest in the world, has disappeared from the market…
It’s a growing trend that people getting their news more readily online, is a sign of the times, how technology is allowing people to be anywhere in the world, and go to social media, click on readily available links. Hence why so many magazines have gone on-line, but how Autosport went along the way of hiking the price of the print magazine up was the weirdest thing I think I’ve seen in a long time, before having to drop it back to a more reasonable price. I now also contribute to Vroom Magazine, who are on that level, so karting coverage does have a good all-round view on the karting world, so there is still somewhere where the drivers and families from the UK can find out another outlet.